Thriving off exercise, Mum to four-month-old Ruby and two-year-old Archie, Linda Pinker has needed to rethink her training strategy and goals over recent years. Even if that means making the kids part of her routine.

“We include exercise in play time, doing things like bouncing on the trampoline, playing tackle and running races, or strength-based exercises where he provides the resistance” – Linder Pinker

What activity makes you the happiest? Generally activities that involve running and other people, so team sports or attending gym classes.

How are you getting going at the moment? I go to personal training two days a week with Peta at Body Torque with two of my friends who are also mums. I have just recently resumed running after the birth of my second child and I am loving it… when I get the chance! How are you juggling getting active with two young kids? I generally try to exercise while my toddler is at daycare and I take my baby with me. My baby comes to the gym with me and watches from the capsule, or if there’s enough space she will play on a mat — she loves it! We walk to and from daycare with the baby in the front pack and toddler in the pram. I also go up the hill or for walks with other friends while taking the pram, plus playing with my two-year-old in the backyard uses some energy! We include exercise in play time, doing things like bouncing on the trampoline, playing tackle and running races, or strength-based exercises where he provides the resistance. For example, he climbs on my back while I squat or do pushups, or his favourite: I hold his ankles (he’s upside down) and perform bicep curls.  We look like a couple of clowns but it’s great fun. Plus as he gets heavier, the resistance increases and, consequently, I become stronger.

Are you a morning or afternoon mover? Ideally mornings — I find it gives me so much energy for the rest of the day — but since becoming a mum, afternoons tend to work better.

What’s your favourite thing to do on a weekend in Townsville? Head down to The Strand for a swim with the family and get a coffee at Juliette’s. What inspires your ‘get up and go’? I find exercise is my ‘time out’ — It’s something that is just for me and I enjoy it, so it’s never been a challenge. 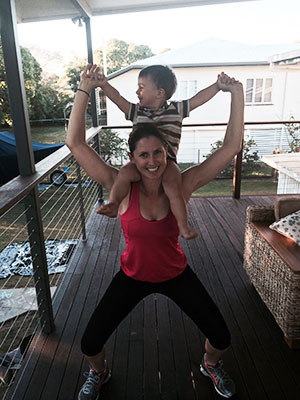 Your most motivating tune? Can’t go past the ‘Eye of the Tiger’ — not the Katy Perry version, the old school one.

Motivational quote? Suck it up so you won’t have to suck it in.

How do you pep yourself up when you’re craving the couch? I say to myself, “If you exercise, then you can have that ice-cream/chocolate guilt-free later.”

Do you prefer to get active solo, or with a buddy? Definitely with a buddy. Usually I’ll find they are stronger or more suited to one type of activity and I’m the opposite, so we motivate each other.

Most annoying fitness fad? Selfies at the gym! Actually, I’m lying, I do love seeing people take them, it’s hilarious; especially the boys when they get their buddies to take one of each other while flexing.

“I slammed on my brakes and went flying over the handlebars. My husband later told me I obviously used the wrong brake… who thinks of those things in an emergency situation?” – Linda Pinker

What’s your greatest fitness achievement? Probably running my second half marathon in 1hr 38mins in 2008 (pre-kids of course). Best active moment? Hmmm… childbirth, does that count? I had two water births, which were both amazing experiences.

What activity have you always wanted to try (and what’s holding you back)? Outrigging. Unfortunately the training sessions are too early in the mornings with a young family.

What’s something we don’t know about you? In my early 20s I lived in London for almost three years working as a sandwich delivery girl. I cycled all over the city, rain, hail or snow, taking lunches up to office city workers and loved it. I was super fit. What’s your next goal? Running the 5km in Townsville Running Festival, followed by the half marathon and Tough Mudder next year.

Most embarrassing moment on the go? Nine years ago I was living in Darwin and had just purchased a new push bike. I wanted to ride it home from the shop (around 12km on a bike path through the bush). I came across some firemen supervising a back burn and there were small controlled fires on both sides of the path. I was pretty hesitant to continue but they assured me it was safe, so started to bike through when a large piece of red hot ash came floating towards me. I slammed on my brakes and went flying over the handlebars. My husband later told me I obviously used the wrong brake (front instead of back)… who thinks of those things in an emergency situation? I managed to take skin off my legs and hands and buckle the front wheel of my new bike. I stood up (trying not to cry) and saw that ALL the (hot) firemen had witnessed it! I was mortified! I was so far from home with bleeding body parts and a broken bike. Kindly, one of them threw my crippled new bike on the back of the fire truck and dropped me home. The training advice I wish I’d listened to was… perform pelvic floor exercises frequently during pregnancy.

Most treasured piece of fitness gear? All my lululemon sports clothing.

My best local fitness tip is… Long Tan 50m pool in middle of the day in winter is magic.

Last words? This is something I tell my clients: If you have a rough day, or even week, and you don’t manage to exercise for one reason or another; don’t beat yourself up about it and think that you have failed. It’s then that you tend to fall back into a cycle of inactivity and overeating.  Consider it a slip-up, don’t think about it again it and face the next day as though nothing has happened.