No stranger to the boxing ring, when John Bryce from Butcher on Bundock heard about the inaugural Fight for your Cause charity fight night this month, he was keen to get involved. He just couldn’t decide what cause to champion. That was until he heard about 10-year-old Tama Mason…

Tama is part of the Western Lions U11 NRL team, based in Heatley. He played in the Laurie Spina Shield just recently, but two days after the Cowboys’ junior competition his parents – Taki and Tuia – noticed Tama’s eye was a little red and he was having trouble focusing. Thinking it was a footy-related injury; they took their son to the doctors. The medical professionals suspected nerve damage and sent the Southern Cross Catholic College student for tests, but the returning scans revealed something that would floor every parent: Tama had a serious type of brain cancer – the disease that kills more children in Australia than any other illness. “We are devastated for the family and the club,” coach Daniel Knapp says, who has known Tama since he turned up for his first training session as an U6 player. “It’s hit the boys hard because they didn’t initially realise the severity of it and that it carries a low survival rate, but we are optimistic and we are doing everything we can.”

The club kicked off ‘Raise for Tama’ straight away with the goal to reach $5,000 – they are currently 20% there. These funds will be used to help the family who’ve had to relocate to Brisbane for Tama’s six weeks of intensive chemo and radiotherapy treatment; leaving their jobs, home and extended family behind as much bigger priorities now consume them.

Daniel says Western Lions teams across all age groups have been extremely generous, plus other clubs in the competition have chipped in with sizeable donations; but butcher John plans to take the fundraising efforts to the next level as part of his September 26 fight. “We have been training hard and this cause has certainly given me the motivation to keep pushing myself when I’m buggered,” John says, who has been drumming-up donations as part of his commitment to the event and – as an expected bonus – has lost 15kg in the eight weeks of training to-date.

Fight for your Cause is organised by Brian Pearson and Brett Johnson from Body Torque Health & Fitness, who both have Queensland, Australian and World Titles under their belts, and they’ve been offering free training to all 30 corporate fighters on the card. The level of interest has surprised them, with everyone from real estate agents to emergency service personnel wanting to take to the ring.

“We honestly do it because we love it – I love seeing people do something they never thought possible,” Brian tells, who has 30 years of fighting and training experience. “We have three girls’ fights and nine guys’, including Tariq Sims’ partner Ashleigh Sudholz, Cowboys commercial general manager Steve Mitchell and one of Townsville’s leading CrossFit trainers Steve Oats… they are all people we either know or can relate to. Most have always wanted to fight, but never had the opportunity – now they can do that, plus use it as a vehicle to raise money for something close to their hearts.”

This event aims to raise a total of $40,000 for local and Australian charities, but the bigger picture goal is even more impressive. “We would love this to be an annual event that raises millions,” says Brian. “We don’t think small – that’s not in our nature as fighters – so I truly hope this is successful, not only for Tama’s sake but for all the causes associated.” 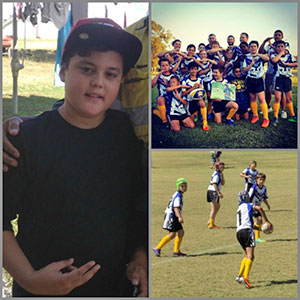 Head along to Fight for your Cause at RSL Stadium on Friday, September 26. Tickets are $30 for adults and $15 for kids. More info here.