One of them is a bodybuilding first timer, while the other has been in at least 10 competitions. We quiz Brent Goriss and Paula Pool about their experiences in recent bodybuilding comps, both as partners and posing solo, and salute their willpower. Brent’s no stranger to building muscle – as a personal trainer he usually lifts weights four times a week. But entering his first body building comp took his commitment to a whole new level, with the father-of-one admitting it was his diet he struggled the most with over the 12 weeks.

“Getting up in front of people is something I’m used to, although maybe not in a small pair of posing trunks, but it did feel natural” 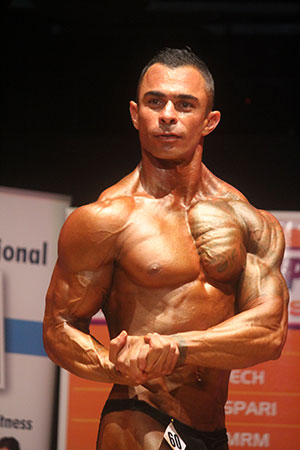 “It was chicken, chicken, chicken, brown rice, sweet potato and greens – I was pretty much eating chicken for breakfast, lunch and dinner,” Brent reveals, usually struggling to resist the lure of the Golden Arches. “It felt like I spent more time outside cooking chicken on the barbecue than in bed.” But Brent beat his cravings and steadfastly stuck to the strict eating regime; a feat he says had a lot to do with the support of his competition partner Paula Pool – also a PT, plus a seasoned bodybuilder – who convinced him to bite the broccoli after years of procrastination and give the sport a go.

Taking out first in the Novice Category and first in the Partners Category with Paula in the Australian Natural Bodybuilding (ANB) Competition at Jupiters in September, Brent then went on to claim second in the 72kg-79kg Category and fourth in the Novice Category in the International Natural Body Building (INBA) Competition at the Townsville Entertainment Centre. He thought he’d be nervous for his first time, but loved it, with him and Paula wowing the sell-out crowd with a Thriller routine. “I think it was because I was confident with what I’d done,” Brent says, who was stunned at how much his body transformed in the last week as he stripped back and applied the trademark tan. “Getting up in front of people is something I’m used to, although maybe not in a small pair of posing trunks, but it did feel natural.”

So would he do it again? Maybe once he overcomes his chicken gag reflex. “It was a lot of commitment, hard work and it was time consuming with the food, but I’d be tempted to do it again to work on my weaknesses,” says Brent. “Your life really does get put on hold – work goes on the backburner and you’re doing cardio in the morning, weights and cardio at night; but I really enjoyed the experience and it was such a great group of people.

“I’d say anyone could do it – some of the people I’ve seen do it over the past few years have made amazing transformations. You just need to have good willpower as there’s temptation everywhere.”

Fresh back from the Australian Natural Bodybuilding (ANB) Nationals where she claimed second place in the Women’s Body Building category, Paula gave herself two days off, but is now well and truly back on the wagon. 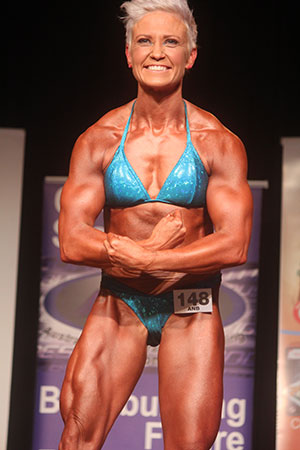 Known for her steely determination and willpower amongst her clients and industry peers, this was the first year Paula has competed with two kids under six and three businesses to run. So how did she do it? Early starts, not much sleep and an iron-tight restraint around crap food: “We made it work and I just did what I needed to do,” tells Paula. “I’m up at 3.15am to fit in my cardio, I don’t get home till 7pm when I organise myself for the next day and all the weekends are taken up. The kids are glad Mummy’s back now.”

Securing first place in mixed pairs in the ANB competition at Jupiters with Brent, coming first in the women’s category of the state titles in Brisbane last month, and second in the nationals in Sydney earlier this month, this year’s 26 weeks of prep was a bit different for the bodybuilding enthusiast, with a new trainer meaning there was less cardio and no extreme dieting. “That’s the biggest misconception: A lot of people say, ‘You must be eating nothing’, but you don’t starve; it’s quite the opposite. I eat a lot of vegetables, sweet potato, rice and meat – just no rubbish.”

Paula agrees with Brent that anyone is capable of travelling the bodybuilding journey and transforming themselves, but willpower is the key. “If you can’t control yourself with a bit of food, then this sport is not for you,” says Paula. “They’ll still be making pizzas and chocolate bars when you’re finished.”

So what’s next on her hit list? Prepping for next year’s comp and ensuring she looks even better. “You learn so much about yourself in this sport,” Paula says. “If you can get through that prep and stand up on that stage… it’s a very empowering thing.”