Thanks to Graham Crawford of the Free Radicals Tri-Be Club for this race wrap-up.

Last weekend saw the last North Queensland Series triathlon of the year take place alongside an ocean swim at the hard-to-beat locations of Hamilton Island and Whitehaven Beach.

“The best part of the ride: a 3.8km sprint up and down the runway. Where else do they close the airport for a triathlon?” 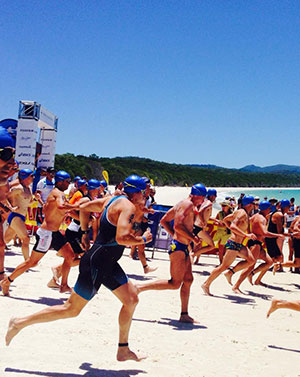 You don’t mind a 6:30am start for a triathlon when it’s in such an idyllic setting. The starting conditions were perfect: slightly overcast allowing for a cool take-off and first half of the race, but eventually the sun broke through to provide a steamy finish.

Nearly 200 competitors took part in the tri which started with a 750m swim around the crystal clear waters of Catseye Bay. This was followed by a short run up the beach to what must be one of the hardest 20km bike courses in the series: “hilly” is an understatement. A short flat section led into the first climb up Mango Hill (a central crossroads, which would see the competitors pass through five times), followed by a steep downhill to the best part of the ride: a 3.8km sprint up and down the runway. Where else do they close the airport for a triathlon? There were two more steep climbs followed by short downhill sections dispersed between. Repeat two more times.

“With the sun now beating down it’s a welcome relief to make it to the line where a thunderous applause awaits along with water, fruit and refreshments – and for a lucky few – a glass of champagne!” Then – just when you think that you’re done with the hills – it’s back up Mango Hill on the run leg. There is some relief with a scenic section around the boardwalk of the marina, but all that dominated competitors’ minds was anticipating what was coming next: The return climb up Mango Hill and on to the Wedding Chapel. And – at that point – you know you’re almost done. Kiss the brides at the chapel and descend steeply into the resort, through the pool area, and onto the beach. You can see the finish line from there but there’s a couple of hundred metres of soft(ish) sand to get through first. With the sun now beating down it’s a welcome relief to make it to the line where a thunderous applause awaits along with water, fruit and refreshments – and for a lucky few – a glass of champagne!

The event wasn’t just all about the fastest finisher with teams and first-timers being well represented. The Hamilton Island Triathlon & Ocean Swim was won by professional triathlete Courtney Atkinson in 1:01, with the last person finishing at 2:21. Townsville was well represented by more than 20 competitors from both the Townsville Tri Club and the Free Radicals Tribe with podium finishes going to Chelsea Gerrard, Connor McKay, Bec Sheppard, Dylan Viviers, Dee Flynn-Pittar, Jill Stephenson, Kaye Atkins and Matt Farmer. A special mention goes to the Free Radicals Tribe ladies for taking out the trifecta in the Female 50-59 Age Group once again!

Not to be left out, Sunday morning saw the kids’ triathlon and splash and dash. Several distances catered for all ages and abilities with every competitor receiving a finisher’s medal.

Next stop – Whitehaven Beach for the ocean swim. Large cats ferried the competitors and spectators to the beach efficiently from Hamilton Island, landing them in style at the heart of the action. The kids’ 350m was followed by the adults 750m and the iconic 2km event.

It’s a serious affair with over 200 competitors including swimming clubs from Melbourne and Sydney, triathletes from the previous day, and the celebrity athletes and ring-ins. The course was marked out with buoys and lined by boats, large and small. There was a professional first aid station, water safety escorts and, of course, the fruit and refreshment tent for afterwards. All setup in paradise.

But by the time the races were due to kick off, the wind whipped up the waves, which – in conjunction with the tide and chop – made for what could only be called “challenging conditions”.

Once again, Townsville was well represented by competitors and there were podium finishes in the 2km race for Matt Pegg, Kylee De Rooy, Emily De Rooy, Chelsea Gerrard and Jill Stephenson. Ky Hurst was the overall winner (no surprise there: it is his event!).

After both the triathlon and the ocean swim there were presentations with food and refreshments provided in the event-specific precinct allowing competitors and support crew to mix with each other as well as the celebrities (the likes of Susie O’Neill, Ky Hurst, Courtney Atkinson). The prizes from event sponsors were impressive, including goodies from Garmin, Fujifilm, Head, Maui Jim and SRAM.

The event shirt will certainly be worn by all competitors with pride in the coming year.

For more results see here. For more information on the event: hamiltonisland.com.au/sports-events/triathlon-and-ocean-swimming