The suggestion to interview Ian Bone was accompanied by a gentle heads-up: This “rough diamond” was a “serious sort of guy” who’d rarely crack a smile, but his heart was in the right place. With a shaved head under a cap and his arms a canvas of some incredible artwork, it couldn’t be a truer statement of this towering two-time Australian title Mixed Martial Arts weapon. But, every bit as tough as he looks, Ian’s double that in articulate, committed and passionate and has dedicated himself to bettering the lives of Townsville’s veterans, people struggling with their weight and youth fighting the justice system. How? Through exercise.

“I think everybody who leaves the military has to fight through a certain amount of deprogramming, deinstitutionalisation, and readjustment to civilian culture”

At the start of the year Ian started a unique training centre that was born from the need to help the people who often feel very much on the outer. “With Courage Training Centre I wanted to develop a culture that wasn’t just about fitness: I wanted our community to have a little bit of a soul,” explains Ian, who spent eight years in the Second Battalion, including time in peace keeping operations in East Timor. A Courage Training Centre session on The Strand.

“So, we’ve started with three not-for-profit programs: One’s for obesity, one’s for veterans, and the other’s for disengaged youth. Along with our normal boot camp and one-on-one training and martial arts classes, we try to empower people who are either struggling with their weight, struggling with their transition after military service, or kids that are in trouble with youth justice.” 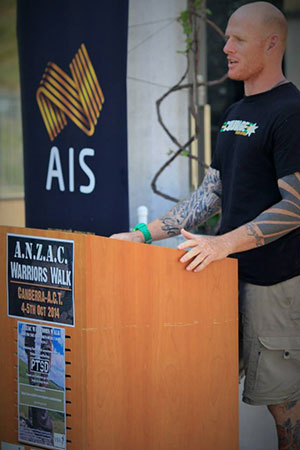 Ian’s time in the defence force, coupled with seeing countless of mates and acquaintances leave the armed services, gives him a unique insight into what it means to transition back to civilian life. And – for many – it’s not as easy as coming home and getting on with it.

“I think everybody who leaves the military has to fight through a certain amount of deprogramming, deinstitutionalisation, and readjustment to civilian culture,” explains Ian, who is also heavily involved in the Veterans Sporting Association (VSA), most recently helping to organise an 80km fundraising walk in Canberra that raised more than $20,000 for the charity.

“So, there’s a transitional period there that people really aren’t taught to deal with. For some people that can be a bit of a rocky road. So what we’re trying to do with the Veterans’ Sporting Association is help veterans to continue to engage in the community and make friends. All those kinds of things that they loved about Australia are still there, they just need a little encouragement to stay involved.”

“Sports in general, activity and routine, are a really good cure-all for a lot of problems; and not just for veterans”

And the Courage Training Centre has become just that: A place for people – whether they are veterans with PTSD or ordinary civilians who feel disconnected – to make friends, workout and feel empowered again. Ian and his trainers Aiden Hawke and Justin Hugget – both ex-military – host a series of classes including Combat Cardio, Combat X-Training, Combat No Gi and Kickboxing and also travel with members to out of town fighting competitions to support them on their new battle line.

“Sports in general, activity and routine, are a really good cure-all for a lot of problems; and not just for veterans,” says Ian. “Those things that we have problems with in society, I think there’s a lot of people now on antidepressants and things like that, we really need to start treating these people holistically and getting them involved back in the community through fitness and sports. If you don’t have a sport then a boot camp might be just the thing to lift you up.” But he adds it’s not just about getting moving – it’s about creating and building the human connection. “Making sure that, wherever it is where you go train, that you have a human connection with your trainers, or the people who are there, is so important,” says Ian. “Then, fitness becomes a sport – you rock up and meet people. You do something to make yourself better for the day.”

Ian and his team are looking to create a drop-in centre early next year where they will be able to help veterans and youth to a greater extent, while also providing health scholarships for people struggling with obesity. “We’re working with the VSA to provide free memberships for veterans upon discharge to help them with their transitional period, and just create a place where people can drop in and have a coffee and relax a bit in a positive environment without the need to be counselled or anything, and then do a workout and maybe say hello to some friendly faces.”

“The greatest thing I’ve probably got from martial arts… isn’t trophies: It’s understanding myself and how to overcome difficulties and jump back on the horse after losses”

Another fundraising walk is also on the agenda. This one will be closer to home in the tropics. An exact date is to be locked in, but Ian is aiming for March and to cover about 120km-180km. But what about Ian personally moving forward? Juggling his time at the Courage Training Centre with his young family (a wife and two girls aged three and eight) he is still fiercely training and competing. The multi-faceted fighter is now in Tokyo for the Kudo World Championships, and next week he’s competing in an international Brazilian Jujitsu tournament as well. But to Ian – whether it’s been boxing, mixed martial arts or Thai boxing – competing has never really been about the trophies; well, not in the end.

“I’m fairly lucky that I spent a lot of time fighting professionally in mixed martial arts and I was lucky to come across two Australian titles for that,” tells Ian. “But the greatest thing I’ve probably got from martial arts, and transitioning through the different sports, isn’t trophies: It’s understanding myself and how to overcome difficulties and jump back on the horse after losses and go back and do it again. Obviously, things are all good while you’re winning and everyone’s your friend; but you also need to learn how to to come back from the lows of lows as well.”

Ian also wants to develop the centre to the stage where he can start grading people in different types of martial arts like Kyokushin, Kudo, Brazilian Jujitsu, and Judo – all in the one facility. “We’re working really hard to make that happen, to put the martial arts back into mixed martial arts,” says Ian.

Until then, Ian and his trainers are still learning from their clients every day, saying the amazing thing about working with ex-service people is that it’s made them better trainers for everyone who comes through the doors.

“We have a lot of people who come in who are overweight, on antidepressants and really not living super healthy lives; right through to people who have legitimate mental health problems like PTSD,” says Ian. “Helping these clients has made us better trainers and better people as well. We’re really, really thankful to be involved with it and it’s definitely been worth the thousands of hours just to see people feel like valuable members of the community again.”