The alarm goes off. It’s 4am… what have I done?

As I savour the last of my night’s slumber I wonder what the hell was I thinking when I made a private pact with myself and secretly hoped this day would never come: I swim like a house brick; I go OK on a bike, but don’t do hills; and running hurts like hell. So why would I ever want to write off a day of my life to do all of these three things?

“I firmly believe in “having a go” or, more importantly, if you can’t then supporting those that can. We truly under-appreciate those people”

I joined the Free Radicals Tri-Be Triathlon Club based on the club’s motto and the fact they walk the talk (“social, brave, reward”). I will never be a stand-on-the-podium type triathlete but I do have a shrine to Mr S. Bradbury, so you never know. As you can see, winning is not mentioned in the club motto, so that suited me fine. I firmly believe in “having a go” or, more importantly, if you can’t then supporting those that can. We truly under-appreciate those people.

It started as an idea then it grew as a challenge and, before I knew it, I couldn’t stop thinking about it: The idea of a Golden Chaos Tri had become an obsession with me. The club puts out a training points system to encourage people to pursue more challenging training sessions than they might be used to. A 5km swim, three-peaks bike ride [Mount Stuart, Castle Hill and Hervey’s Range], or 21km run are not easy to achieve as stand-alone requirements, so why would I want to do all three as a continuous triathlon by myself? The longest I had swum before was 3km in the pool with coffee breaks so – by far – this was the biggest challenge for me. 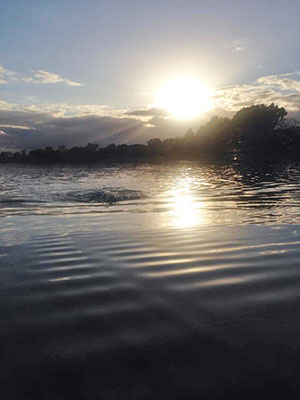 At 4:30am I entered the murky waters of Ross River at Rossiter Park. I also brought my kayak along and a great friend to keep an eye on me. At about the 2km-mark I hit my first bank of weeds. OMG: Memories of Lake Moondarra as a kid in Mount Isa came to mind. After getting back on track, I swam through the rising dawn – can’t believe people sleep through that sight every day. But come the dawn, also come other early risers and the rowing fraternity was out in force. FYI – those guys are flying, they have their backs to you and the last thing they expect is some idiot swimming in their lane. But the look on their faces was priceless when they saw me trailing my kayak like a trolling lure. After a bit of back and forth to ensure I got my 5kms up I finally finished and overcame my biggest fear for the day.

Kayak packed up then bike stocked and ready to go, Mount Stuart was my first destination: 9km of hell. The only reprieve was a short break in the middle, but it’s short lived and you are left with just your will to get to the top. Number one hill done and a random stranger harassed for a photo, then it’s down we go. Castle Hill was next to be ticked off the list and I soon realised that it’s a lot easier to run this rock than ride it. Castle Hill topped and I had to push a few sandal and sock wearers aside to get the mandatory selfie. Then it was off to Hervey to see what he had in store for me. Had time for a MAMIL [Middle Aged Men in Lycra] good deed when I told a driver he had a broken brake light. He said thanks and returned to his 23C air-con, V8 Land Cruiser… sigh!

“Problem found: I had put the original punctured tube back into the tyre… hmmm: I’m not real clever….” Half way through the three peaks on top of Castle Hill.

Herveys Range nearly did me: no breeze and by then it was just after midday, but I got there. My bike was now no longer loving me with my bottom bracket making some strange noises, then just to show it certainly wasn’t a happy camper, it spat out a flat front wheel as I dismounted at the top. The tyre sidewall was cut and I had to fix the tyre if I wanted to continue on. Tyre fixed then replaced the tube; tube replaced, only to go down again… noooooo!! I was sure I didn’t pinch the tube. Problem found: I had put the original punctured tube back into the tyre… hmmm: I’m not real clever….

Bike lifted above head for picture then back to transition at Rossiter Park. Anyone who has gone down Herveys knows you can get a hell of a speed up: well I didn’t touch my brakes once as the headwind was so strong.  Me and Harry Head Wind had a few words on the way back: He agreed to stop smashing me if I didn’t go faster than 31km/h… it’s amazing how every street option, short cut and bike path come to mind when you’re trying to work out the shortest way home. A stop at Rupertswood store found me putting my 12 years of education to good use: What’s the most fluid/nutrition/food I can get for $10? A 1.25L coke, 600ml water, and two Chuppa Chups? No, no: Swap them for a bag of lollies. Done and with 10c to spare. Ate and drank like a king – now had to get my butt home.

“I kept saying, “If I can put one foot in front of the other I’m finishing… if can I do it faster, I’m finishing sooner”

Bike leg done: 135km and three peaks; now to stretch the legs. In all seriousness, this was tough, very tough. All I wanted to do was walk, but this is the very reason why I wanted to do this challenge: The point where I knew I would eventually arrive at had come: Anyone can give up and walk but if you want to go to a different place and see what you can do, you have to see past the ‘can’t’ and see the ‘can’. I kept saying, “If I can put one foot in front of the other I’m finishing… if can I do it faster, I’m finishing sooner”.

It’s funny where your next smile comes from. A poor young girl had fallen and skinned her knees and I had to wait for her to wash them clean before I could refill my water bottle. That break was so good and my pleasure was not in her pain, but in the relief her pain did for my pain. A great friend as a pacer, a garden sprinkler and sheer stubbornness saw me complete the 21k run and my personal challenge was done.

“Maybe, as you did for me, I can be another rung in the ladder of fitness that enables someone else to feel brave enough to take the next step” This is my story of my day out, doing what I like to do. The reward for me was sitting back and reflecting on the adventure and journey that this challenge took me on: what I learnt about myself, the reaction of my friends to what I did, and wondering who I might have sparked into finding their own challenge.

Now, I know many out there have done greater deeds and those deeds have helped drive, inspire and challenge me. Maybe, as you did for me, I can be another rung in the ladder of fitness that enables someone else to feel brave enough to take the next step.