Kim Booth has held onto the same black leather belt over her entire weight-loss journey. At 124kg, she would punch more notches in it as the kilos peeled away; now two years on and 60kg lighter it wraps around her twice. Kim’s mission to “feeling alive again” is undoubtedly inspiring, but what is truly remarkable is how many other lives she’s been able to touch along the way in such a short time. Of course, she doesn’t see it like that… 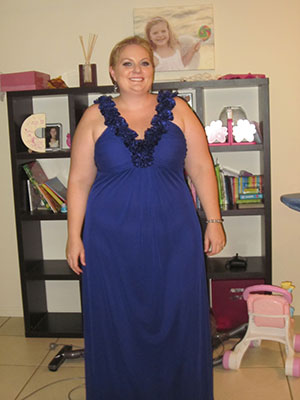 Gaining 60kg doesn’t happen overnight and – like many people – Kim’s weight gain followed a tragedy that understandably floored her in her early 20s.

“I had a son who was born with a lot of abnormalities,” begins Kim; the words still difficult. “After four days we had to turn off the life support. To combat the grief, I buried myself in my work, which involved travelling around Australia and I gained my first 40kg in 18 months. Then when I had more babies I was eating more and the weight piled on.”

Kim’s son would have been 12 now and she says it took her a good 10 years to recover from his passing. “Now I can finally find the light within the situation,” she tells stood alongside three friends on top of Castle Hill one Sunday afternoon. “I wouldn’t have the opportunity to be doing what I am now, I wouldn’t have the husband I have, the kids I have, and I wouldn’t be able to help people: I’ve finally found the faith in myself to be able to move forward.” And move forward she has: After reaching rock bottom in the lead-up to her 30th birthday, including enduring the humiliation of being given a seatbelt extension on a plane and being told, on her honeymoon, that she would hurt the elephant that she was riding – Kim decided she was ready to do something about her weight. On her 30th birthday she gave the biggest present to herself she possibly could and started at Body Torque’s Community Health Club – a free six-week program.

“I didn’t think I’d lose any weight as I’d tried so much in the past and yo-yoed and nothing seemed to work,” admits Kim. “But with this boot camp I was too scared not to show up every night. I lost 8.4kg in the six weeks, and then I was too scared to stop in case I put the weight back on.”

Now two years on and 60kg lighter, Kim – who continues to take clothes that are several sizes too big into the change-room out of habit – is still training at Body Torque. In fact, she is so hooked that in September she started on a path to a new career, signing up to do her Cert III in Fitness, and will go on to do her Cert IV qualifications to become a personal trainer. She now finally feels like she is doing what she’s supposed to do.

“I look at her and think: If she can do it, then I can do it too” – Stacey Watkins

“I feel alive now and the best thing about being where I am now is having the opportunity to give support to others. I can help others now who are overweight and don’t know what to do about it: It’s about giving other people that opportunity to gain back their freedom.”

Stacey Watkins, 28, met Kim through Body Torque’s free community program. She too was over 100kg and has since shed 56kg through moderating her diet, regularly attending group exercise classes and developing the mantra of “just keep going”. Stacey and Kim still do the boot camp sessions together, with Stacey saying that she admires Kim for never being scared to try something new and always being willing to help others.

“You always see those ‘before’ and ‘after’ weight loss shots in magazines, on Facebook or on the TV, but when you’re a bigger girl that transformation seems so unbelievable” – Jazz Gourley

“We’ll all be running, and Kim will slow down and run beside someone who is struggling,” Stacey tells, “It motivates them to keep going. She knows exactly what people are going through, as she has been there herself. I look at her and think: If she can do it, then I can do it too.” Jazz Gourley, 31, certainly agrees. The single mum started her fitness journey in March this year, losing 26kg of her 111kg to-date, and says Kim has a big part to play in her success story.

“You always see those ‘before’ and ‘after’ weight loss shots in magazines, on Facebook or on the TV, but when you’re a bigger girl, you sort of look at it and think, ‘Oh yeah’ because that transformation seems so unbelievable,” Jazz explains, the ex-smoker adding succeeding at weight loss needs the same level of commitment required to beat any addiction.

“But when you meet Kim and see her photos from a couple of years ago it blows your mind. You think if she can do it, why can’t I, or the girl standing next to me? Kim is always getting people to push themselves, she knows the gym, she’s down-to-Earth and she knows the demons we face everyday. I just want to thank Kim for being our inspiration, and for basically just being her.” But Kim – ever modest – simply laughs and says they’ve got it all wrong: “These guys and the people who train with me: They inspire me,” she insists.

They give it their all and I think, ‘Shit man, I need to keep up!’ They may not know it, but it’s them who keep me going.”