This year is shaping up to be a big one for ex-gymnast Danny Miles as he sets his sights on Ironman Port Macquarie in May, Ironman 70.3 in Cairns in June, and Ironman 70.3 Sunshine Coast in September; and as NQ Triathlon series events as he can in between. Things have certainly changed since 2009 when – weighing 30kg more after full-time work took over – he battled to make it up the Goat Track without feeling like his body was going to give up. How are you getting active at the moment? I’m preparing for my priority races by swimming, cycling and running 15 to 18 hours per week. I try and get the occasional cross training session in on the mountain bike or kayak whenever I can. What activity makes you the happiest and why? I really enjoy seeing the sun rise. To me it symbolises a fresh start each day. The odd thing is as a kid and – to be honest – until I had a full time job, you pretty much had to drag me out of bed any time before lunch. So pretty much any activity that allows me to see the sunrise makes me happy.

How did you discover it? One moment that really stuck with me was on my final dive to get my open water scuba diving qualification. We broke the surface just as the sun was rising and the feeling was just amazing.

“Day five I thought I was having a heart attack on the Goat Track. I struggled through it, but I didn’t give up and completed his ridiculous 10-day challenge” 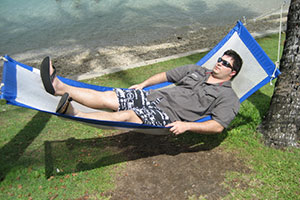 Have you always been active? Up until I finished high school I was very active, representing Queensland in gymnastics and competing in swimming, athletics and waterpolo. Then during university the level of intense activity declined. I got back into waterpolo for a couple of years but that didn’t last. Some serious injuries derailed my motivation and, once I started working full time, sports/fitness became non-existent. At my largest [116kg], my boss at the time tricked me into promising to walk Castle Hill once a day for 10 days with him, as we were both overweight and something needed to change. By day three I was just about dying. Day five I thought I was having a heart attack on the Goat Track. I struggled through it, but I didn’t give up and completed his ridiculous 10-day challenge. This was early 2009 and from there I got into touch football. After a couple of seasons I attempted my first triathlon in 2011 and have been hooked ever since.

Are you a morning or afternoon mover? I move any time of day I can or need to in order to achieve my goals. Your most motivating tune? Welcome to the Jungle by Guns n Roses.

Motivational quote? “Strength does not come from winning. Your struggles develop your strengths” – Arnold Schwarzenegger 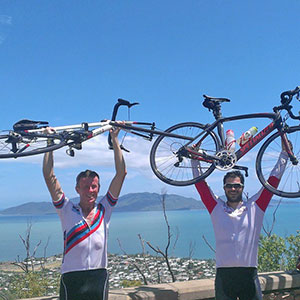 How do you pep yourself up when you’re craving the couch? These days I really don’t find myself craving the couch. I would rather be outside doing almost anything. When I do find myself on the couch (usually on the floor on my foam roller) it’s almost always because my body wants me to stop punishing it and I probably should give in.

Do you prefer to get active solo, or with a buddy? I prefer to train with a small group of people as so many of my sessions would have me stuck in the middle of nowhere if I had an issue. However, so much of the time in an Ironman triathlon, ultra marathon or ultra adventure is spent by yourself, so I also have to do a lot of solo sessions as you need these to get your head in the right frame for the race.

Most annoying fitness fad? There are so many I don’t think I can select just one. Diets, tech gizmos, miracle workouts, slim fast pill popping products…

“I had a great swim, coming out of the water in about 10th place, and when I got to my bike I took one look and my race was over: I had forgotten to unlock my bike”

Most memorable active moment? My brother getting me across the finish line of my first Ironman 70.3 in Cairns. What activity have you always wanted to try (and what’s holding you back)? Outdoor rock climbing. I suffered a pretty serious shoulder injury a number of years ago and have not built-up the strength or courage yet to give it a go. What’s something we don’t know about you? I am a Mariah Carey fan.

What’s your next goal? Complete Ironman Port Macquarie in under 12 hours.

What are you doing to get there? Swim, ride, run, repeat.

Most embarrassing moment on the go? In my second triathlon it was suggested to lock your bike up in transition overnight, so I did. On race day I set my area up, did my warm up and was joking with some mates about the no-no of trying something new on race day (food, equipment etc). I had a great swim, coming out of the water in about 10th place, and when I got to my bike I took one look and my race was over: I had forgotten to unlock my bike.

Who would you most like to train with? I am really lucky to be training with some pretty talented local people at the moment who are really supportive and pushing me to my limits and beyond what I never imagined I could reach. If I had to pick a famous person, it would be Australian triathlon great Craig Alexander. The training advice I wish I’d listened to was… rest days are essential.

Most treasured piece of fitness gear? This is a tough one… Garmin 920XT.

My best local fitness tip is… when trail running be prepared for all scenarios.

Tell us a joke (why not?) How do you know if you’re a runner? You run up and down your street a few times to get the extra few hundred metres on your Garmin.

Last words? Another quote from one of my idols: “The mind is the limit. As long as the mind can imagine that something can be done, then it can. As long as you believe in it 100%” – Arnold Schwarzenegger