It seems sisters are doin’ it for themselves, with this year expecting to see a 30% increase in ladies signing up for Magnetic Island Adventurethon. In a sport traditionally dominated by the fellas, event organiser Joel Savage says he’s really excited about the future of women’s Adventurethon, with the likes of Deahne Turnbull blazing the trail for other local adventure-racers.

“Deahne has really paved the way for other locals to take up endurance sports and to show they can beat the boys in what has primarily been a ‘men’s sport’ for some time,” tells Joel. “There’s been a greater amount of interest across all female events, but it’s exciting to see the addition of some really quick girls leading the charge in the BNG Sports Ultra event, including Andrea Peebles, Leela Hancox and Speights Coast to Coast champion [New Zealander] Jess Simson.”

We caught up with some of the lovely local ladies – spanning from age 12 to early fifties – to find out why they have signed on the dotted line and what they hope to get out of this iconic Townsville event.

“As a mother they’re still setting their own goals, doing the things they want to do, and achieving great things, and I want to show that to my girls”

After doing the Taste of Adventurethon in 2013 and upping it to the Enduro last year, this year Joanne Koy is taking-on the mighty Ultra. While the good humoured lover-of-all-things-outdoor admits she’s a bit apprehensive, she’s also pumped, with the mother of two using it as part of her training for the 10-day 700km XPD Race in August.

“I love these events – I did all sports as a kid and got into adventure tourism in my 20s, but then I went and did the mainstream thing in business and it wasn’t until my eldest daughter said to me, ‘Mum you used to rock climb, and bike ride and do all this cool stuff’ that I decided to get back into it again. I love adventure racing because it’s so raw and you’re out there in the elements.” While Jo’s aim is to cross the finish line (and not cry or fall off her bike, she adds with a laugh), she is looking forward to racing alongside the professional athletes, who are a huge source of motivation for her. Plus she wants to be a good role model for her two girls (aged 5 and 8), who are already involved in bike riding and dancing, to prove that it’s possible to give anything a go.

“Females are so under recognised in sport and some of our local talent, women like [National Road Series Champion] Ruth Corset, inspire me so much; especially in the way that they juggle their family, work/business and sport – as a mother they’re still setting their own goals, doing the things they want to do, and achieving great things, and I want to show that to my girls. They always ask what I’m doing next and that really inspires me.”

This is Patti Nahrung’s third Adventurethon on Magnetic Island after doing her first adventure race at Pallarenda in 2012. As a mountain biking enthusiast, Patti revels in the toughness of the Enduro event and the training in the lead-up, which she likens to “training to survive”. 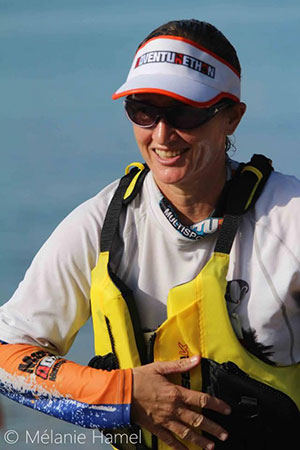 “I don’t train to an elite standard, but it gets me off the couch and gives me something to aim for,” tells Patti who’s in her early 50s with twin daughters, one of whom is doing the junior Adventurethon event on the Sunday. “It is tough going, but anyone can do it of any age; I’m no spring chicken myself (laughs).

“You don’t need to go out there to win – it’s about setting your own goals and having fun. Once you’ve crossed that finish line, the best thing is sitting down and talking to other people about your experiences and the funny things that happened along the way.”

“It’s quite an empowering thing to do for yourself”

Brandi Watson has signed up for the Performance Physio Dirty Duathlon after doing her first Adventurethon last year at Pallarenda. With three kids (11, nine and five) and a business that she runs with her husband, she’s looking forward to doing something for herself and building her endurance ahead of the North Face 50 in mid May. “It’s quite an empowering thing to do for yourself,” she says. “You’re so satisfied when you finish, and – if you don’t – it gives you something to aim for next time so it’s a win-win.”

She’s looking forward to a weekend away on the island with family and friends who are also taking part in the event.

“At the end of the day, it doesn’t matter where you come – the beer still tastes as good!” With four kids, a fulltime job, the paperwork to look after for the family electrical business and massage clients to work on; the week doesn’t hold much training time for Donna Audas. But she still manages to get some activity in every day – a walk with the dogs up the hill and a bike ride to and from work. She’ll use this residual fitness to tackle her second Taste of Adventurethon with partner Richard:

“I’m completely unprepared, but I signed up last year because my partner did the Duathlon – this year we both still wanted to get involved as we had so much fun, but haven’t had the time to train, so we’ll do the Taste and the kids might do the junior version too.”

Last year Donna acquired her mountain bike from a friend the night before the event and she’d never been in a kayak until she was lined-up on the starting line. She hasn’t been back paddling since then, but hopes to get a couple of practice sessions in before March 29 to make sure she at least heads in the right direction.

“I’d say to everyone that the Taste is very achievable,” Donna says. “I was a bit nervous last year as I didn’t know what to expect, but if you give it a go you get to try three different disciplines, then later on you can choose the one you like the best and focus on that; and it gives you exposure to activities that you otherwise wouldn’t have tried. At the end of the day, it doesn’t matter where you come – the beer still tastes as good!”

“When you see the finish line with the crowd clapping and cheering it’s an absolutely incredible feeling!”

Zanelle (12) and her three siblings – twins Charlana and Nalilze (10) and younger brother Michael (8) entered their first Adventurethon in 2013 and haven’t looked back. Last year they all did the junior event as individuals and they will be returning this year to better their results after consistently training together as a family. “I love the challenge you get in each activity,” explains Zanelle, who’s an also an avid mountain biker, trail runner, swimmer and plays basketball and soccer. “You need to prepare well, but on the day there are such a lot of challenges that you need to handle and make split-second decisions. It teaches you to persevere and overcome the tough times, and then when you see the finish line with the crowd clapping and cheering it’s an absolutely incredible feeling!”

Zanelle encourages other girls of her age to give it a go, saying it takes a lot of discipline to fit in the training around homework, school and other after-school commitments, but the experience makes it well worth it: “You can’t lose anything by trying, you can only fall in love with it and enjoy the spectacular scenery and the excitement. I really love the challenges you are exposed to in all three legs of Adventurethon and I’m really excited about seeing my sisters and brother finish.”

Tips from the girls