Rachael Griebenow had never heard of ‘Cystic Fibrosis’ when a nurse told her that her perfect two-week-old daughter, Skyla, would have to endure the life-shortening chronic illness that affects the lungs and the digestive system. Wanting to bring more resources to Townsville to help the 30 children being treated for CF in Townsville Hospital, Rachael started the Cystic Fibrosis Charity Fun Run – 65km that’s shared by four people. There will be teams hitting the treadmills at The Zoo Health and Fitness this weekend to raise awareness and $20,000 for local kids.

“Whether it’s new physiotherapy equipment or entertainment for the kids during their long stays in hospital, I have so many wonderful ideas and hope I can raise as much money as possible to enable all this to come to fruition”

Can you tell us about Skyla and her journey with CF so far? One in 10 children with Cystic Fibrosis are diagnosed shortly after birth. This is due to a condition called meconium ileus, where – in some cases – the gut becomes blocked with meconium – a thick, dark, sticky substance, which is made by the baby’s gut before being born. Urgent surgery can be needed to relieve the blockage.

This was the scenario for Skyla: At just two days old she started vomiting and her stomach was distended, so she was rushed to the Mater children’s Hospital for urgent observation. Luckily, Skyla did not require surgery, but instead received many bowel flush outs. Initially, the doctors were unsure if the symptoms were related to Cystic Fibrosis and this was the first time we had ever heard the words ‘Cystic Fibrosis’.

At two weeks old, we received the heel prick test results, which confirmed Skyla did in fact have CF. That day is a day I will never forget as long as I live. I clearly remember handing the phone to my mum: I couldn’t or wouldn’t believe the nurse on the phone. I remember saying over-and-over, “But she’s perfect – look at her”. I was the first person to make that statement about our gorgeous baby, yet – almost six years later – if I tell people she has CF I get the same response that I first made. 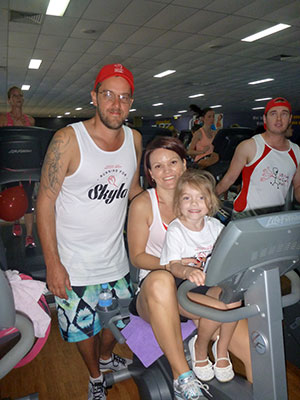 As time has gone by, I have realised what is truly needed here in our community for these children. In the last 12 months Skyla has spent a lot more time in hospital both here in Townsville and in Brisbane and this has made me realise how many wonderful things they have down south that we just don’t have access to up here.

So this year, all funds raised will stay here in Townsville. In conjunction with Cystic Fibrosis Queensland, CF physio team, nurses and doctors at the Townsville hospital, I will be using all funds raised to improve our children’s time away from home. Whether it’s new physiotherapy equipment or entertainment for the kids during their long stays in hospital, I have so many wonderful ideas and hope I can raise as much money as possible to enable all this to come to fruition.

How did the CF Fundraising Run come about? I started the event after I saw what four amazing CF mums were doing on the Sunshine Coast. Again this year we will be joining the Sunshine Coast teams for our 65kms for Cystic Fibrosis: Team SKYLA.

“It’s important that I set a good example for Skyla to stay active. By doing that she will increase her lung function and keep her healthier for longer”

How will you do the 65km? Teams of four will each run 65kms (16.25kms per person) on treadmills at The Zoo Health and Fitness on Sunday, June 21. This year, as part of our fundraising and as a celebration for all of the kilometres ran, a charity auction and masquerade ball will be held on Friday, June 26.

What training are you doing to prepare? I work out regularly at The Zoo, taking part in their classes and using all their state-of-the-art equipment.

Have you always been active? Yes, I was an active child and tried my best to keep active becoming an adult, however it’s a very important part of my life now. I often say it’s cheaper to workout then go to a psychiatrist, but seriously, it’s important that I set a good example for Skyla to stay active. By doing that she will increase her lung function and keep her healthier for longer. 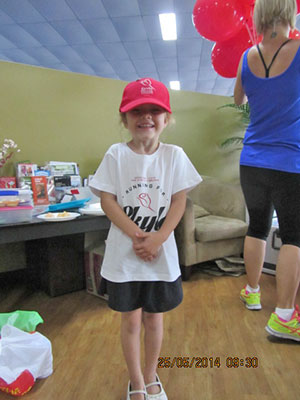 Is there anything in particular that Skyla enjoys doing? We have a saltwater pool at home and its very important that she swims daily to help with her lungs and mucus clearance. Skyla also comes to the gym with me and does a kid fit class, rides her motorbike and loves her trampoline. But her favourite physical activity is playing with our dogs, or ‘the babies’, as she calls them.

What’s your greatest fitness achievement? Organising and completing the first run would have to be it: For me it’s the first time my exercise was about more than just me or Skyla, but about raising awareness for a cause very close to my heart.

Last words? There are 30 children currently being treated for Cystic Fibrosis in the Townsville General Hospital and I really want to give these kids the same equipment that kids in Brisbane have access to so that their families don’t have to continue to travel. These kids are in hospital for a minimum of two weeks at a time. As you can imagine, for a five-year-old that’s a very long time. Skyla has been admitted five times in the past 12 months so hospital is becoming her second home. Please help me help her and all the other kids. Help Rachael raise $20,000 to help local kids with CF. You can click here to make a donation or get together a group of 10 and go to the Masquerade Ball. Or, alternatively, put together a team and join Rachael on the day running 65kms.