Mixing it up with her choice of activities, postie Sue Price enjoys everything from outrigging to triathlon and walking Castle Hill to working her core. Her persistence and commitment with her training has earned her silver and bronze medals at the 2012 Outrigging World Va’a Sprint Championship in Canada. But she’s adamant that it’s not all about winning – rather, being the best athlete you can, enjoying what you’re doing and remembering to take your rest. She’s learnt that the hard way.

“There’s nothing better than being out on the water in a canoe as the sun rises, or walking Castle Hill in the evening as the sun sets”

How are you moving at the moment? Just trying to do a variety of training – outrigging, weights, core workouts, Castle Hill, riding, swimming, etc. I’m mixing it up a bit as a few things have fallen through for me this year and I’m trying to rework my goals. I’m keeping the muscles guessing so that when I decide what I’m doing I’ll be ahead! I have a couple of outrigging regattas to focus on and I’m also planning on competing at the Airlie Beach and Bowen triathlons later in the year. What activity makes you the happiest and why? Riding my bike would probably be my fave at the moment. I just seem to be able to get into a zone and keep going. It’s also one activity that doesn’t seem to affect my knees too much.

How did you discover it? My son started doing triathlon in his early teens and I got interested through him. I started on a mountain bike and have slowly progressed to a half decent road bike, so things have gotten easier for me.

Have you always been active? Definitely: I participated in a lot of inter-school sports and kayaking as a teenager and have done mainly hockey, triathlons and outrigging as an adult. Are you a morning or afternoon mover? I would like to be a morning mover, but as work starts at 5.30am, I do most of my training in the afternoon. Weekends I train both Saturday and Sunday – mornings and afternoons.

What’s your favourite thing to do on a weekend in Townsville? A variety of things: There’s nothing better than being out on the water in a canoe as the sun rises, or walking Castle Hill in the evening as the sun sets. Riding while the sun rises is also a special time for me.

Your most motivating tune? I don’t really have one, as I don’t listen to music when I’m training.

Motivational quote? Never, ever give up: You have done the training now believe in yourself. How do you pep yourself up when you’re craving the couch? Usually I find a buddy to come and train with me. It always seems to be easier when you have someone else along.

Do you prefer to get active solo, or with a buddy? With a buddy: I am definitely a team person and hate training on my own.

What’s your greatest fitness achievement? Doing a Sprint triathlon in under 1hr 20 mins and getting four first places at an outrigging regatta. Plus getting silver and bronze medals at the 2012 Outrigging World Va’a Sprint Championship in Calgary, Canada. 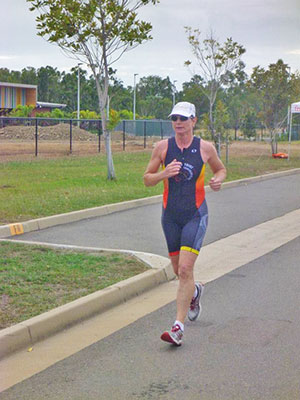 What activity have you always wanted to try (and what’s holding you back)? Run a marathon: I have problems with my knees, which don’t allow for a lot of running so the training would be pretty much impossible. I ran a half marathon last year at the Townsville Running Festival and have actually paddled a full marathon, so don’t feel so pressured now.

What’s something we don’t know about you? I have a fear of fast-moving water as I nearly drowned in a river in New Zealand as a teenager.

What’s your next goal? Walk the Overland Track in Tasmania.

What are you doing to get there? Lots of walks up Castle Hill, and I’m planning on doing Mount Cook on Magnetic Island [497m] and Mount Bartle Frere [highest mountain in Queensland at 1,622m] a bit later in the year.

Most embarrassing moment on the go? Falling off my bike in my own driveway after a long ride.

The training advice I wish I’d listened to was… Make sure you incorporate rest days into your training schedule. I pushed myself too hard earlier this year and ended up with one infection after another because my body was run down. It took me out of action for nearly two months and I did not cope with it very well. I have definitely learnt my lesson.

Most treasured piece of fitness gear? Years ago I would have said my mouthguard for hockey. Nowadays though I would have to say my bike. I just love to be on it but maybe that’s because I don’t really spend as much time as I would like riding. I’m hoping to change this in the next months.

My best local fitness tip is… Train in a variety of places to keep your mind and body guessing. They say a change is as good as a rest.

Tell us a joke (why not?) I’m useless at jokes.

Last words? Train wise, train hard and keep at it. It may seem that you are going nowhere most of the time but if you are persistent eventually you will achieve. Life is not always about winning, but about being the best athlete that YOU can be and enjoying yourself while doing it. If you want to have a go at outrigging, contact one of Townsville’s three outrigging clubs. They all have free come try sessions on a Sunday. Find more information here.