How to get involved in triathlon…

Trying your first triathlon can seem daunting, but it needn’t be. Free Radicals Family Triathlon Club’s (FRT) mantra is to make triathlon accessible for all and the breath of its members are testament to this. Here club co-founder Graham Pemberton gives us an overview of the sport, why it’s great to join a club, and why you – yes you – can do it.

“The real beauty of it is that you can start to develop the three elements swim, bike and run independently to get you a bit fitter with our newbies team coaches”

About the Free Radicals Tri Club

Did you know that there are two triathlon clubs in Townsville? The Townsville Triathlon Club and our club, the Free Radicals Family Triathlon Club. The Free Radicals is a family-friendly and all-ability triathlon and multisport group, initially for the Townsville region, but we are expanding. We now have a good membership base in Charters Towers, and hope to run a triathlon there later this year. We aim to help all individuals maintain fitness for life, not just for a race. A holistic approach to fitness and wellbeing is where we are aiming; bringing into play experts and experienced athletes to help you and us achieve a mutual goal. What we do at the club:

Weekly all-ability group training
Munchkins and junior sessions
Monthly training competitions (we call it CHAOS!)
Newbies-only sessions
End of season awards and celebrations
And more…
(and it’s all included in your membership fee)

Could I do a triathlon?

So, the most asked question as a coach is: “Do you think I am capable of doing a triathlon?”.  You bet you can! But before we look at putting it all together let’s look at what makes a triathlete: Enter average Joe. This fella you may or may not recognise – he’s a triathlete and a good one! He owns the Phone Surgeon, have you got it yet? 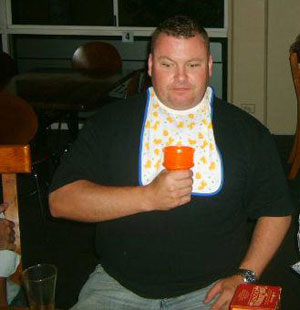 Jeremy Moffat, owner of the Phone Surgeon, is one of the many success stories of triathlon.

So the answer is most certainly YES, but like all good things it takes a bit of effort. The real beauty of it is that you can start to develop the three elements swim, bike and run independently to get you a bit fitter with our newbies team coaches, and when you’re ready you can them move up to the main squad.

It’s a 50-50 deal: At the club we have some fantastic coaches and personal trainers, who will give up their time for FREE (Sunday Squad Session) and take other group activities – that’s our 50%. Your 50% is to get out of bed and join in and be social. It really is that simple, or is it?

In the early days (newbies) it’s quite hard, we have all been there: 12-week challenges, 12-month gym memberships – not that there’s anything wrong with that at all, but you start off with all good intentions in January and by the end of March you’re done. You’ve had enough.

That’s because some activities are a bit like ‘Wham bam thank you ma’am’. But triathlon is different – you need to think of it as a lifestyle change. We want it to become a habit – a healthy sustainable habit – that’s the 50% we would like you to bring.

“We are social, brave and rewarding and will help you every step of the way. We have both male and female development coaches, physical trainers and kids’ coaches on the team”

But I like a beer, and I like wine, and I love chocolate! And that’s OK: I will race you to the chocolate! I used to do a Mars Bar work out (burn 500 calories so I could eat one!) We don’t tell people to change overnight, but just encourage them to become aware of what’s going in and what’s being produced by their bodies. It’s a long-term investment of body and mind: With us all living longer we need to look after our bodies a bit more.

Here’s some feedback from a FRT newbie after six months: “My life has changed for the better, not only because I have lost weight but my relationship with my wife has improved dramatically: I feel much better, we are much better”.

This is one of the best places to train and race in Australia (but you don’t have to race): We have a great climate all year round. When it gets too hot we do a bit more swim training, and ease back on the running. Deep water running in the pool in the wet season really helps and it’s good to do as a group. One of the reasons Jeremy likes FRT so much is that, “It’s completely inclusive of all abilities and levels”.

We are social, brave and rewarding and will help you every step of the way. We have both male and female development coaches, personal trainers and kids’ coaches on the team. Luca Sansalone, a professional builder, has come a long way in the year he has been with the club, and is now recognised as one of the most experienced club athletes. He also contributes to the club by taking social squad sessions and makes it fun for all, always smiling, always there to offer a helping hand. He is one of many, likeminded individuals who offer support to other club members – that’s the FRT ethos: NO EGOS!

The word from some newbies:

“I am a complete beginner to triathlon. I’m overweight and in February, 13 weeks after having a baby, I started going to the Free Radical newbie sessions. With the support of the coaches I have improved beyond measure and will be doing my second enticer at the Townsville Triathlon Festival. The Free Radicals is the most supportive, friendly, fun and welcoming group of people I have ever met. If you are thinking about giving it a ‘go’ then come out on a Sunday morning you won’t regret it.”
Heidi Hatherell – Director, Crystal Clear PR & Marketing “My son Daman and I have never felt so encouraged and welcomed by a club until we joined the Free Radicals.”
Rod Johnstone – Managing Director Rod Johnstone Pty Ltd

Next weekend, June 14-15, the FRT and other Townsville triathletes are going en mass to Ironman Cairns. We wish all the members the very best of luck – especially the first timers moving up to the 70.3 (Half) Ironman, and also doing the epic full Ironman for the first time.  You have all worked hard over the last six months, now #GoGetIt.

I will be detailing some of the highs and lows of the race right here and talking about race preparation leading into the Townsville Triathlon Festival… see you next week.

Triathlon Australia, the rules we are governed by, now also covers kayaking under its insurance policy. When you join our club, you are covered by insurance while training and racing for swim, bike, run and paddle. Bonus!

As part of the Triathlon and Multisport Series, join Free Radicals Tri Club’s Sunday morning training sessions at North Shore, or the special 5km practise run/jog of the Townsville Triathlon Festival on Tuesday, June 9 (the course has changed so it’s a great opportunity to find out where to go). Find out more about these sessions and the other events on offer here.