Luke Miles, Jo Koy and Colin and Wayne McMurtrie are the only 100% local team to sign-up so far for the epic XPD Expedition Race that’s coming to Townsville for the first time in early August. With 700km to race, tackling treacherous terrain with little-to-no-sleep over seven to 10 days, the consensus is they are unlikely to come out the same people who went in. We recently caught up with them to see how the training was going and how they are feeling ahead of this huge event that is drawing adventure athletes from all over the world to our doorstep.

As someone who’s bursting with energy and always searching for a way to push her limits, Jo Koy was on a mission to convince The Precinct Fresh Market’s Luke Miles to sign-up for XPD every time she did her shopping. No stranger to testing his own physicality, including an expedition onto the slopes of Mount Everest solo and unassisted in the middle of winter 2013, and completing several Ironmans and local Adventurethon races; Luke finally cracked, lured by the new physical test. Luke Miles (right) near the top of Mount Kilimanjaro resting the day before a summit push.

“I needed a challenge and Jo came in about four times full of excitement and was so pumped up – I didn’t even know what XPD was,” he admits, currently squeezing in as much training as he can around running a business, including a windy overnight paddle to Magnetic Island with teammate Colin the night before. “And then I realised this race is one of those shows when you flick the TV on at the weekend and see those mad nutters in the middle of nowhere just going for days… and that was coming to Townsville.” Jo adds in: “The really appealing factor was that we didn’t need to travel to find adventure – it was coming to us. There’s so much country that we haven’t explored here – we don’t know how wild it is until we get out there.” 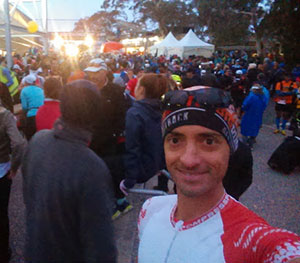 Wayne McMurtrie at The North Face 100.

Then they just had to find other teammates. Jo’s partner Colin McMurtrie was keen, and Colin roped his brother Wayne in who is ex-military and recently competed at The North Face 100 (100km trail run in the Blue Mountains) and did a 250km Red Run in the outback last year. Colin is only fairly new to the competitive scene, getting inspired by adventure racer Jo last year when he first joined her on a training ride at Pallarenda and was told he needed to keep up if he was allowed to come along. The team admit it’s going to be the toughest thing any of them have ever done. By way of background, every XPD team must pack their own supplies in the lead-up to the race – a trunk full – and only has access to this throughout the duration of the event. Teams race non-stop – the professional teams from France, New Zealand and South Africa will race for about five days through the North Queensland wilderness without sleep so they can cross the line first. Everyone else must finish the event within 9.5 days. Participants only get the course 24 hours before departure so must use this time wisely to plan their race. No technology is allowed – just a compass and a map.

“I don’t know of any Australian adventure races that go for longer or are more challenging – It’s like putting 10 Adventurethon Ultra’s back-to-back and not sleeping in-between,” says Luke, who – along with his other teammates – is embracing the principle of training like they are going to race – i.e. dog tired.

“Expeditions I’ve done go for more days, but I was able to rest at night, so that’s the difference. You’re not resting at night, where as I could push my body to the absolute limits during the day, set-up a tent, and lay down in the tent and try to refuel and go again. “But with this one, we are going to finish a monster bike ride, get off the bike, put on some running shoes then go and do the biggest run any of us have ever done, and then when we’re completely exhausted, get into a kayak and go for the biggest paddle we’ve ever done and then repeat it again and again until we finish the course. “We don’t know what our minds are going to go through – we won’t come out the same people as we went in. You’ll just have a whole new respect for what you can do and for what other people can do. “It will be the hungriest I’ve ever been, the thirstiest I’ve ever been, the most sleep-deprived I’ve ever been and people will push me more than I’ve ever been pushed, and then some more. I just want to see what I can do.” Jo and Colin teamed up for HotRock24.

Jo agrees, saying it will be about the mental strength and working together as a team. “I had some pretty big race falls last year and hurt myself and realised I wasn’t as strong as I thought I was, but said ‘That’s OK – we can build from that’,” says Jo who’s biggest challenge to-date has been the four-day Herbert River Gorge Expedition. “It’s just all about working on those micro goals that bring you to the larger one. Also, learning to be more accepting of other people’s limitations, but also teaming up with people who you know are mentally strong so when you are in your weakest moment they say, ‘I know you’re OK’, but also respect that you’re a bit busted, so let you sit for an hour and keep going. “I think you need to know that you’ll be able to have a good laugh – that’s what it’s all about – having that bit of a crash then ribbing each other enough to go ‘I’ve still got some left’ – they’re the moments you think back to when you’re almost close to defeat.” Townsville’s premier adventure racing athlete Sam Stedman has also signed up to XPD with a national team – Peak Adventure. Let us know if you are local and are taking part and we’ll check in with you in the lead-up to and during this exciting race.

XPD Expedition Race is from August 3-14. If you don’t want to race (as appealing as it sounds!), you can still get involved as a volunteer – everything from checkpoint officials, to mid-camp managers, search and rescue team members, media assistants and live website managers. To get involved in volunteering, see here.