Maximise comfort and reduce injury on your bike

When Mike Prentice was racing in the Ironman World Championships in the 1980s aerodynamic helmets didn’t exist, his Raleigh bike weighed as much as a small child, his wife Wendy had sewn his jersey, and he was mistakenly relying on Coke as his hydration (painful lesson); and he still managed to pull 9:15 – with a mechanical – for a 3.8km swim, 180km bike ride and a 42.2km run.

While ‘Iron Mike’s’ ability is mind-blowing in the face of today’s technology (context: If Mike had done his 9:15 at Ironman Port Macquarie 27 years later in May 2015 he would have come eighth out of 1650 athletes); the trial and error of training and competing left him riddled with injuries and needing a hip replacement in his fifties.

FREE SESSION: As part of the Triathlon and Multisport Series, Top Brand Cycles is hosting a free bike fit and comfort talk on Wednesday, June 3 at 6pm. Bookings are essential. For more information and to secure your spot see here.

Yet – as the owner of Top Brand Cycles on Charters Towers Road – Mike struggles to comprehend how many riders – from mums and dads and weekend warriors to competition level athletes – are getting around on incorrectly-fitted bikes and causing themselves discomfort and, ultimately, lasting damage; and quitting the activity they once enjoyed. Mike with the Raleigh Bike that he rode in numerous Ironman races, including the 1986 World Championships, and his matching jersey (made by wife Wendy) behind.

Here Top Brand Cycles’ Jake Salmon – also a triathlete – looks at Mike’s time as a competitor and now as a coach in the fast changing-sport of triathlon. As you’ll see, today’s athletes needn’t be part of the same sharp learning curve…

“If only athletes of today realised how lucky they are…” 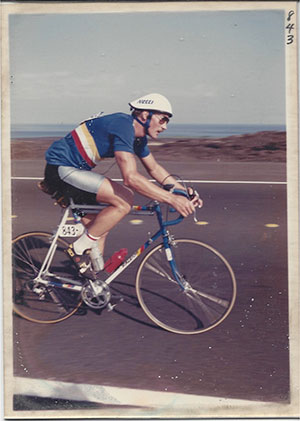 Mike in action at the 1986 Ironman World Championships in Kona – the same bike and jersey he still has at the shop.

When Mike started triathlon it was still the same event it is today – the distance, the rules, the history. But one thing has changed, and will continue to change: The advances in technology have evolved the sport from one of sheer hard work and long hours, to one of precise calculations and advanced technology.

The athletes of today still have to work hard – but the mistakes made and lessons learned by their predecessors have taken the ‘guess work’ out of training and racing.

Power meters, wind tunnel testing, nutritionists, physiotherapists, psychologists, carbon bikes, carbon wheels – and of course there is still some hard work there too. No one rides blindly for hours on end anymore: They have the equipment and advice to succeed – not just now, but for the long term.

Mike knows too well the effects ‘hard work’ can have on your body. Mike, the recipient of a new hip just three months ago, wishes he had access to the technology and support the athletes of today do.

What you can do about it

After decades of competing at the elite level it wasn’t till a few years ago that Mike discovered he had a significant leg length difference (LLD) – a shorter Femur and Tibia in his right leg. This LLD, while at first was not a serious issue, would have just resulted in Mike being slightly stronger on one side. Mike winning the 1989 Townsville Sprint Triathlon… the morning after his wedding!

However, over years of training and competing over thousands of kilometres, this LLD has caused the unnecessary wearing of his left hip, onset scoliosis in his spine and constant discomfort both on and off the bike.

Mike knows now that had he been able to have a bike fit like is available today, his LLD would have been discovered and saved him the pain and anguish he has had over the past five years.

The ability to measure flexibility, range of movement, hip rotation, ankle and knee support, arch type and, of course leg length difference, is what makes a modern day bike fit so successful and much more than a quick sizing, or adjusting of the seat.

With Mike’s history, he has a very deep understating of the importance of bike fit. Over the years he has been fitted by some of the best fitters in the world. Dr. Andy Pruitt, Director of the Boulder Centre for Sports Medicine and one of the most respected authorities on bike-fit in the world, fitted Mike last year – in fact he was the one who eventually convinced Mike he needed a new hip!

Mike has since developed a dedicated Bike Fit studio in his store Top Brand Cycles and he himself is one of two trained Body Geometry Bike Fitters in the store. Mike has personally seen the benefits of a good bike fit in riders of all levels, and sadly been the victim of an incorrect bike fit.

It’s incredible how advances in technology can change, and how hopefully they can keep people active and enjoying the sport they love for as long as possible.

Since Mike’s hip surgery, he is now out on the bike – recently tackling longer distance rides – and been given the ‘OK’ from his surgeon to run again!

Watch out Townsville triathletes – we may see ‘Iron Mike’ again… One of the finishing pics saved from Mike’s World Championship days.

If you’ve never been correctly fitted on your bike, get in contact with Mike or the team at Top Brand Cycles to organise a Body Geometry Bike Fit. The process is highly thorough and technical – lasting three hours is looks at your riding goals, strength and flexibility, and the way you ride. Bike Fits should really be completed every couple of years as your body changes. Some of the Top Brand Cycles team.

There’s a FREE Bike Fit and Comfort Session at Top Brand Cycles on Wednesday, June 3 as part of the Triathlon and Multisport Series. Learn first-hand about this valuable process as Jake takes participants through a demonstration. It’s from 6pm and bookings are essential. For more information and to book see here.

Check out this video here of some Goers who have been recent recipients of a Top Brand Cycles Body Geometry Bike Fit.

This article forms part of the Triathlon and Multisport Series: An initiative supported by the below local business and sporting clubs to further the participation of this sport in Townsville.

Jake is a qualified Body Geometry Bike Fitter at Top Brand Cycles. He is a regularly at mountain biking, road cycling, track and triathlon events - yes, he has a lot of bikes and knows all about them! Living and breathing anything on two-wheels, he is passionate about helping other people to get the most out of their riding experience.