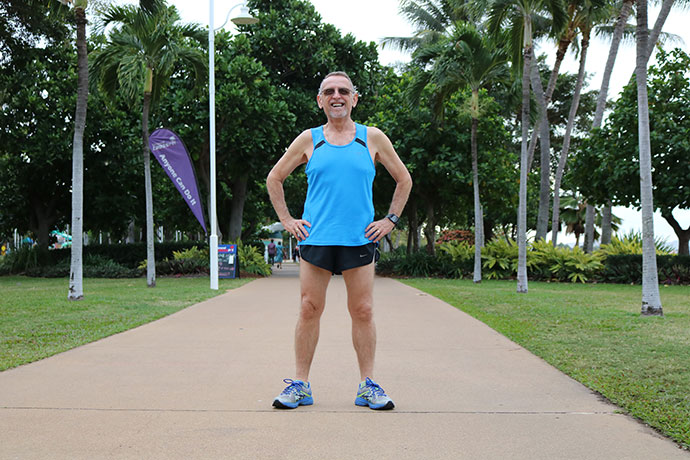 Starting jogging to lose weight and build his fitness in 2005, 63-year-old Dave Hampton has happily caught the running bug, competing in every distance from 5km fun runs to three marathons (42.2km). Battling through a couple of injuries over the past few years, the 10km distance is now his event of choice, which Dave is looking forward to attacking in the McDonald’s® Townsville Running Festival in a couple of weeks. You can join him too — it’s not too late to set some goals.

“The feeling at the start line after 14 weeks or so of serious training and with over 5,000 other runners was almost overwhelming”

How long have you been running and how did you get into it? After recovering from an illness in 2004 and deciding it was about time to ‘get fit’ and lose some weight in early 2005, I started running. My first ‘fun run’ was that April — the 8km ‘Lest we Forget’ run organised by Townsville Road Runners along The Strand. I had no expectations of what time I would run — the only goals I set for myself were to finish in one piece and run all the way. I came in 202nd out of 219 in 55 minutes and 31 seconds, an average pace of around seven minutes per km. I ran a few other fun runs in 2005, but was never really serious about it.

Dave at the Canberra Marathon in 2012.

Then in early 2006 I joined Townsville Road Runners and started running regularly and doing the things (some) runners do, like logging my runs, recording my times and setting some serious running goals. As my fitness improved, I started entertaining the idea of entering a more serious event and training specifically for it.

So I decided that a half marathon would be the go and chose the Gold Coast half marathon (2007). I got together a training program from various resources — online, magazines, friends — and set about getting myself ready for the big day. The feeling at the start line after 14 weeks or so of serious training and with over 5,000 other runners was almost overwhelming.

I finished my first half marathon in 2 hours 9 minutes and to say that I was pleased would be a gross understatement. I felt so good that I texted a mate with the result, saying “I’ll be back next year for the big one”. I ran another half marathon at the Townsville Running Festival four weeks later and improved my time by six minutes. I was hooked.

“Set a goal, record your progress, and go for it. Ask other runners and get involved with a running group like Townsville Road Runners”

What do you love about it? The social side, keeping fit, and meeting great people from all walks of life who love running.

Are any events or races particularly memorable? The marathons on the Gold Coast, Melbourne and Canberra were pretty memorable, including running onto the MCG to finish in Melbourne and running around the government precinct in Canberra with my family cheering me on. But then I’ve had lots of great moments at the Townsville Running Festival — my first half marathon, running with friends, and passing the ‘party zone’ on the Esplanade [with the Hash House Harriers], which gets better every year. 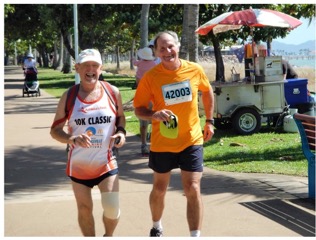 Running alongside a long-term friend at the Running Festival last year.

What’s the best thing about the ‘home’ event? The course, the scenery, and the weather.

What are your top training tips for the 10km event? How can people best prepare? 10km is truly achievable for anyone — even if you have to walk it. Set a goal, record your progress, and go for it. Ask other runners and get involved with a running group like Townsville Road Runners. Another great option in Townsville is parkrun with a free 5km run every Saturday at Riverway and North Shore.

What other activities do you enjoy? Since nursing a few injuries over the past couple of years I have scaled back my running to just once or twice a week. I’ve recently bought a road bike and now ride most days to maintain my fitness.

Last words? Running and cycling are now part of my life and I think will be for as long as I’m able. It keeps me fit, gives me focus and a tremendous amount of self-satisfaction. If I’m to be honest, it also makes me feel just a little bit smug in that I’m doing what most people can’t be bothered with. 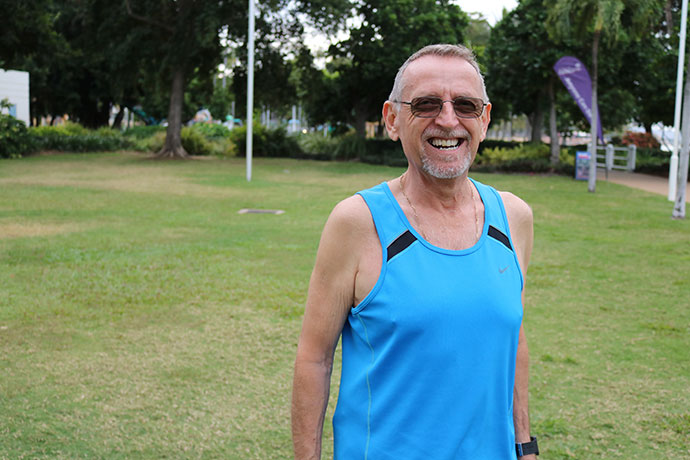 It’s not too late to sign-up for the Townsville Running Festival on Sunday, August 2. There’s an event to suit every level of fitness or running experience, from the 2.5km Hero Run, right through to the 42.2km marathon. Pick something and challenge yourself. Even if you have to walk a bit or a lot of it, it will set a benchmark for next time. And there’s nothing more motivating than a goal that needs beating! Find out more about event event here: townsvillerunningfestival.com/

The new course for the 10km event. There are more maps on the Townsville Running Festival website.