The word ‘inspiration’ gets bandied around a bit, but once you read this interview with Nikki Hammon we’re sure you’ll agree — she has certainly motivated us to do more. As a mother to three (aged one, three and five), she also runs her own graphic design business and, yet, she has still managed to create the time to do something for herself. In doing so, she has discovered triathlon, lost 14kg, gained a whole contingency of new friends and managed to shake the post natal depression that was weighing her down.

“The bike leg scared me, I thought I was going to drown in the pool after 50m, and the only thing I could do easily was run”

How did you discover triathlon? I had never thought of being a triathlete: I wanted to run (still do) but my friend Heidi Hatherall — who is now my training partner — convinced me to join her in the Free Radicals Tri Club’s Pink Lady Charity Triathlon [March 2015], so I thought, ‘Why not?’ We did the six-week training program that was included leading up to the event and, the entire way through, I had no intention of continuing. The bike leg scared me, I thought I was going to drown in the pool after 50m, and the only thing I could do easily was run. But, it turns out, after competing and meeting a bunch of amazing ladies, not getting hit by a car or drowning; I joined the Free Radicals Tri Club and I’m now officially addicted!

What other active things do you do? I love to run — it takes me to a happy place — plus hot yoga, the gym and taking the kids for rides on their bikes.

Have you always been active? Growing up I was very sporty and active into my mid 20s. I loved equestrian and was involved from the age of four until I was 26, competing at state level; plus did netball and long-distance running at school, and social touch footy in my 20s.

“I was diagnosed with post-natal depression: I was stressed, unhealthy, unhappy with myself, and overweight. So I set a goal to be able to run in as many 5km fun runs in 2015 as I could.”

You’ve lost 14kg (and you’re looking awesome!). How did the weight creep on, how long did it take to lose it, and how have you done it? I put on a few kilos over the years, but having my babies was the killer. Quinn [Nikki’s youngest] was born in February 2014 and in July/August I was diagnosed with post-natal depression: I was stressed, unhealthy, unhappy with myself, and overweight. So I set a goal to be able to run in as many 5km fun runs in 2015 as I could. 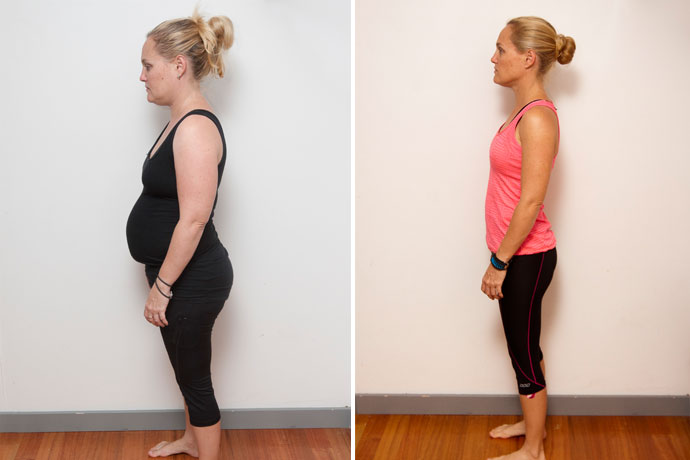 Nikki Hammon before and after she decided to do something for herself and get fit. 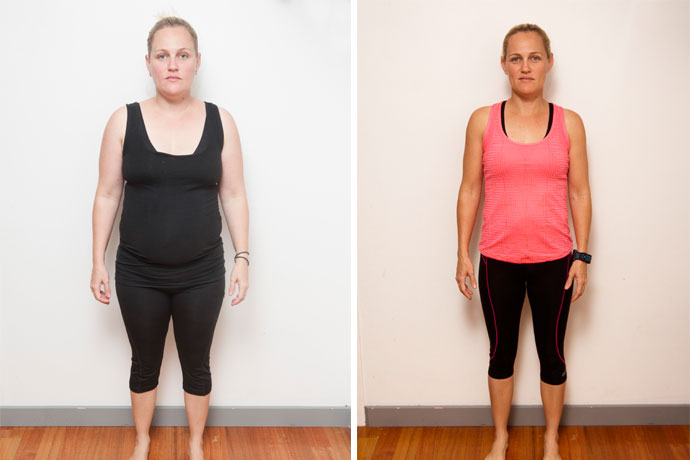 In October last year I asked my partner Troy to pull out the few odd weights we had in the shed so I could set up at home, but he suggested I join a gym. So that day I joined the same gym as my PT Deb Roberts from Vital Force, who I’d been going to for years to get massages. I started the next day. It was horrible: I was so unhealthy and unfit! But, with the expert guidance from Deb each week with my PT sessions and nutrition, I lost 10kg in 10 weeks. I did get a bit excited about losing the 10kgs and didn’t think I could lose anymore, but here I am — 14kg lighter and 200 per cent healthier.

Did getting active help with your post-natal depression? Absolutely: I don’t think I would be as happy and motivated and feel absolutely amazing if it wasn’t for getting active. It has been great socially as well: I have met so many lovely people and amazing ladies; it’s inspiring. Smashing her goal at the Mother’s Day Fun Run.

What’s your most memorable active moment to date? Hmm, apart from actually getting fit and healthy, I would have to say achieving one of my main goals: to complete a 5km run in 25min. I did this in the Mother’s Day 5.2km Fun Run in 24.13min. I was super proud of myself. My first 5km was the Australia Day Fun Run, which I ran in 32.45min.

Proudest achievement? Being a better role model for my kids and knowing that it’s rubbing off on them when I see the girls practising swimming, riding and running around the house — it’s hilarious; I love it.

What’s your next big goal? I have so many goals now it’s crazy — it’s really hard to choose! I have goals to compete in a number of triathlons in North Queensland this year and better my time in each and work up to the longer distances; but probably the next BIG goal will be the Townsville Running Festival Half Marathon – I seem to have a knack of letting people convince me to do stuff I’ve never done before! A long-term goal that I would love to achieve is to complete 5km in 20 minutes.

“With three kids and my own business I have finally found time for myself, which has not only had an amazing impact on how I feel about myself, but how my kids see me and how much of a better mum I am for them” With the kids and training buddy Heidi Hatherall.

How do you find time to train with three young kids? What are your tips for other mums? It has its moments! There are often arguments about who gets to come for a run with me — I could only push one in the pram and it often ended in me going for a stroll while the girls rode their bikes and Quinn went in the pram, but I have recently acquired a double jogging pram which will hopefully make life a bit easier. I’m very lucky to have my partner Troy (who’s a very hands-on dad) at home to look after the kids so I can train in the mornings and, then when they’re at school and day care, I squeeze in a swim or run during the day. I train almost every day. I have three days a week that I have set training times (early mornings) and the other is when I can fit it in around work and the kids, plus club training on Sunday mornings.

I had never been a morning person but after having kids and now being fit and not staying up until midnight working, I find mornings enjoyable and easily wake up to go training. So many times when I’m working or having a bad day all I want to do is go for a run and, if I can get out, I feel so much better.

Did you meet new friends through being involved in triathlon? I have met a bunch of fantastic people — my Facebook friend count went up significantly (laughs). I love the social side as well as the active side.

What would you say to others curious about triathlon or wanting to give it a go, but doubt their ability, or capacity to commit time-wise? I have met so many women from all walks of life through the Pink Lady Triathlon and it’s really inspiring to see everyone giving it a go. Some ladies couldn’t even swim, and yet they gave it their best and crossed the finish line. As for time, I never thought I’d have time, but I have — with three kids and my own business I have finally found time for myself (with the help of my partner Troy), which has not only had an amazing impact on how I feel about myself, but how my kids see me and how much of a better mum I am for them. What’s your top tri tip? Oh gosh… keep it fun! Take all the advice you can get and find what works for you. And, if you’re just starting out, don’t wear socks. What’s your must-have piece of gear? My Garmin! No more counting laps in the pool. And, of course, I can’t go swimming without my Peppa Pig pink swimming cap. Well, actually it’s my daughter Addison’s cap. I needed a cap for training one morning and the only one I could find was Addi’s Peppa Pig cap, which turned out to be a great conversation starter at training and so it stuck and the girls love it. They both came dressed up in ‘Team Peppa’ attire for my two triathlons.

Last words? Do the best that you can but, most of all, enjoy it and have fun! I’m so glad I’ve caught the tri bug.

You can find out more about the Free Radicals Tri Club here and the Townsville Tri Club here — both offer a fantastic atmosphere for newbies to get involved.