This weekend saw the annual pilgrimage to Bowen and the Free Radicals Triathlon Club (FRT) was out in force with record number attending the pre-dinner — we even got the rare treat of listening to the pitter-patter of raindrops on the tin roof!

In case you were wondering — yes, it was blowin’ in Bowen! 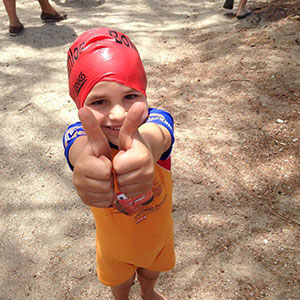 The kids’ race was completed on Saturday afternoon, and the club had some great representation, with young Ari (five years old) stealing everyone’s heart.

But as dawn broke on Sunday the wind had dropped, it was overcast but not raining, and the conditions were near perfect for the adults’ race; although the sea looked a little bumpy. It was inspiring to see the Pink Ladies in action, with some stepping up to their first sprint distance. These ladies and relative triathlon newbies have created a great friendship born from the Pink Lady Triathlon that the club created and hosted earlier this year and it’s been fantastic to watch them progress.

When it was time for the race to start, the males got away first and it was a bit of a washing machine to the first buoy. I was on the feet of Ben Cooper and pinned in on both sides were young Riley Smithers, 14 (the youngest you are allowed to take part in a sprint) who was taking some flack from the bigger guys; while at the other end of the spectrum was Colin Ryan, 60, taking it easy at the back of the pack — very wise! The Pink Ladies get ready to race.

The turn at the first buoy was chaotic, but after that the field soon spread out. Five-minutes after the men’s start the ladies were away, and the chase was on from Alex Bagley. Alex is a phenomenal swimmer and is proving to be a great triathlete. The full race was in progress now, with the teams and enticer following the main race. The Tribe was well represented in all areas, and it great to see people making up the teams and having fun.

The wind had started to get a little stronger by now, but — for the main part — it was a crosswind and really didn’t impede the bike leg. We saw some strong cycling from the Top Brand Cycles team and Off ‘n’ On Bikes with Troy Argent (Off ‘n’ On) having a great race, and chasing Sam Murphy (Top Brand), who had now taken the lead. Matt Norman from VéloWorX had an exceptional bike leg using science and strength to chase down the field (Matt is definitely one to watch). Through transition, it was out onto the now hot and windy run leg along the beachfront — if only we had time to pause and take in the beauty of what is a spectacular part of our coastline, but hearing the footsteps behind signalled it was time to focus and push on.

The leader, Sam Murphy, was being followed by Matt Hutchinson, and then it was Troy Argent, chased by the young Richmond Sense, who were having a great battle for third place (Sam eventually claimed first place, Matt Hutchinson second, and Troy third). In the field Billy Guy and Matt Farmer were in great form in their Age Groups. Alex Bagley dominated the ladies’ race from the start, taking out first place on the podium — she’s a great all-rounder. Again, there were some strong Age Group performances from the women’s field. The FRT dominated the ‘mature’ ladies category with the top three places going to the Tribe via Dee Flynn-Pittar, Christine Cairns Tracey, and Jill Stephenson. Colette Hayes did a great job taking out first place in the 20-29 AG. As did Annika Frossling in 60+, fresh back from the AG World Championships, in great form and looking great in her Australian colours. Also from Townsville, Carmel Linning claimed the top spot in the 40-49 category.

The Block made a special guest appearance with Caro taking out first place in her 30-39 AG and Kingi taking… pictures! Good luck for the rest of the series.

The full results are here. The next Free Radicals club race is at Charters Towers on Saturday, October 24 at 3:30pm. There are some great sponsors, including Queensland Country Health Fund, and many more spot prizes, plus cash prizes for the winners. For more information and entry go here.