Kyle Bridgwood was on an early-morning ride four years ago in Townsville when the Army private was hit by a car, severing the then 22-year-old’s patella tendon, fracturing his kneecap, and resulting in an acquired brain injury that affects his co-ordination and fine-motor control. Despite being hospitalised for three weeks and undergoing six months of rehab in Brisbane, he returned to cycling within just 12 months representing the Army and winning a gold medal in the 2012 Marine Wounded Warrior Trials. With fresh motivation, the next step was getting classified as a para-athlete, and — from there — Kyle has been dominating in the sport, particularly this year. In April he got silver at the Cycling Australia Para-cycling Road National Championships, going on to become Para-Cycling C4 Time Trial World Champion in August.

While Kyle has his sights on the Rio Olympics next year road racing, he is using track training and competitions to become a stronger rider and will join cyclists from far and wide this Friday and Saturday night for the Townsville Cup on Wheels. We caught up with Kyle in the lead-up and found out why this is a great event for spectators to watch him and other talented athletes in action.

How long have you been cycling and when did you start riding competitively? I have always been around bikes and, when I was younger, did what kids normally do racing their friends around the streets and going to BMX parks. Eventually I started training for triathlon in Townsville, which didn’t turn into anything more than that, as I got injured while running. But, because of triathlon, I naturally started cycling more and met some friends through riding in 2009 and decided to start racing in the local club scene. Having fun while racing.

Can you tell us about your achievements as an able-bodied athlete — what was your proudest moment? As an able-bodied athlete, I was progressing well through the sport before my accident in 2011. I still compete now in able-bodied races and ride for the Continental Data#3 Symantec Racing Team, which is an achievement in itself. I was very proud when I represented the Australian Army at the 2012 US Marine Wounded Warrior Trials and won the gold medal in the road race. It was less than one year after my accident, and the doctors were telling me that I wouldn’t be riding again for another 12 months.

How long did it take to get back on the bike after the accident? It took me about six months before I was back riding on the road, but during that time I was doing rehab in Brisbane. I was using a spin bike — at first I couldn’t do a full pedal stroke, but I slowly worked away at it.

What’s your proudest para-cycling achievement? Winning the individual time trial at the World Championships in Switzerland this year, which made me Para-Cycling C4 Time Trial World Champion. It took awhile to sink in what I had actually done, but it felt incredible.

What was the experience like competing on the world stage and getting this result? The experience was absolutely amazing with lots of emotions — I see it as another step forward in my journey from the accident. What’s been your involvement in the National Road Series (NRS) this year? I haven’t had much opportunity to race much NRS this year compared to the past two years due to being overseas a lot with commitments to para-cycling, but I did Toowoomba and, just last weekend [October 24], Grafton to Inverell — both these events I was in a support role. Although, I got to race the Cadel Evens Great Ocean Road Race earlier this year, which was another incredible experience riding with seasoned pro tour riders!

The 2016 Rio Olympics is in your sights — what do you need to do to get there? I still have a few more boxes to tick before I’ll be going to Rio next year. I need to qualify for the Track World Championships at Nationals in December (2015) and then get a good result at the World Championships in March (2016). At the moment I am carrying a niggling injury, but otherwise everything is well on track and things are looking good! 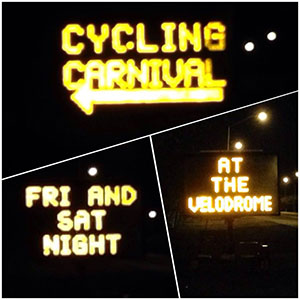 Promotion in the lead-up to the Townsville Cup on Wheels.

How does this weekend’s Townsville Cup on Wheels fit into this? I am doing the carnival to gain some more experience on the track and in track racing in general, as this style of cycling complements your road riding quite well. I am still very new to track racing, so very excited to getting out there and giving it a go and seeing the more experienced track riders in action.

Is it going to be an exciting event for spectators? Absolutely! Normally for a road race you will only see the riders for a few seconds and they are gone, but track racing is extremely spectator friendly. Spectators can also enjoy a few drinks while watching the action unfold.

What’s your training schedule like at the moment? I am doing track twice a week while still doing 20 hours of road riding and a few gym sessions. I am planning on doing some bunch rides while I’m in Townsville [Kyle is now based on the Sunshine Coast].

Do you have any tips to share that you’ve learned that could be valuable to others? Don’t worry about the things you don’t have any control over and don’t let the little things get to you. A big one for me is to not take it to seriously and always make sure you are still having fun while riding your bike! On the road to getting silver at the Cycling Australia Para-cycling Road National Championships.

The Townsville Cup on Wheels is a great opportunity to observe fast-paced competitive cycling in a safe environment. The biggest event for Townsville Cycle Club for the year, riders and spectators will be drawn to the Townsville Velodrome (Idalia) from near and far with the facility being one of only three state-standard velodromes.

Spectators can sit and watch the various races without having to move from place-to-place, including juniors as young as seven years of age through to elite riders.

The cost to watch is a gold coin donation and all proceeds go towards next year’s event.

If you come along and get keen to give it a go, Townsville Cycle Club has special adults and juniors nights, with junior membership in the last 18 months has increasing by a huge 70%.

“We believe this is due to the fact that we offer coaching at such low costs and also provide the ability to hire track bikes,” Townsville Cycle Club’s Angela Cundy says. “Juniors are encouraged to all learn at their own pace and it’s a great introduction to cycling in a safe environment with no traffic or obstacles in the way. Some of the booming junior numbers at the Townsville Velodrome.

“This approach has been so successful that parents and older members have requested to join these sessions. We have even begun to offer hire bikes for adults and this has lead to a group of adults learning how to ride track over the past few months. These members are now embarking on their first competitive carnival on a bank velodrome this weekend.”

For more information about the Townsville Cup on Wheels this Friday and Saturday night, see our Events Calendar.