There’s nothing like a bit of family rivalry to fire competitive streaks, but we’re not sure who we’d put our money on to trump the other in the battle at Hamilton Island Triathlon this weekend.

Will it be seasoned Townsville triathlete Jeremy Moffat who has the experience of 15 races, but is nursing a persistent injury; or his brother-in-law — Manuel (Manu) Sierra — who has come all the way from Colombia to complete his first ever triathlon with Jeremy? Manu is 10 years younger and reportedly a hill-slayer, training up to 3000m above sea level on mountain bike, but until this week he’d never swam in the ocean and, just seven months ago, hadn’t swam at all.

But, rivalry aside, one thing’s a sure bet — this duo are going to have an amazing time with their families when they head south for the festivities of Hamo this weekend.

We caught up with them both to find out how they were feeling ahead of the event that’s known just as much for the race as the amazing opportunities to recover (they don’t call it the champagne triathlon for nothing!). “Manu was behind me and did what all good training partners should do — he checked the bike for damage, paused my Garmin, took a picture of me on the ground, posted it to Facebook, and then checked to see if I was still breathing” – Jeremy

Have you done Hamilton Island triathlon before? Yes, I’ve done it for the past three years. This weekend will be my 15th triathlon overall.

What do you enjoy the most about Hamo? You can’t beat the location — it is beautiful. It’s without doubt my favourite race. It’s hilly on the ride and the run, so it challenges every level of athlete.

How do you feel going into the event this weekend? I am always relaxed up until the last minute before the swim start. The washing machine of the swim can be daunting, even when you have a few races under your belt. I relax once I get into my stroke, but — as I swim like a seahorse at the best of times — it’s always a ‘gentle’ pace. Jeremy has done about 15 triathlons locally and further afield.

What training have you done in the lead-up? I’ve been carrying a hip and calf injury for a few weeks, so I have been limited to swimming and riding. I attempted the Bowen Triathlon four weeks ago and pulled up lame in the first kilometre of the run and haven’t run since. The run at Hamo will be a ‘surprise’ (laughs).

Are you excited about doing the event with your brother-in-law? Manuel is 10 years younger so I have told him there is a time penalty of one minute per year. As a Colombian, he fancies himself as a hill rider as all Colombians do. Living in Bogota, he is at a much higher altitude than Townsville so he has big lungs. I have the experience, but not necessarily the legs, but will definitely give it a crack. 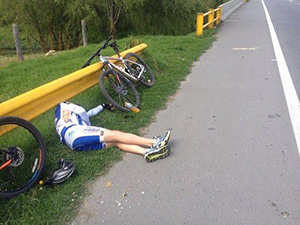 I visited Colombia last December and went for a ride with him on a borrowed bike. We went from 1500m above sea level to 3500m. The combination of not having trained for a few weeks and the thin air resulted in me passing out on the bike due to altitude sickness. Manu was behind me and did what all good training partners should do — he checked the bike for damage, paused my Garmin, took a picture of me on the ground, posted it to Facebook, and then checked to see if I was still breathing (laughs). I call him ‘Salvavidas’, which is Spanish for lifesaver.

Anything else to add? This is Manu’s first triathlon. He has needed to learn how to swim just to compete; so finishing will be a momentous occasion for him. I am super proud of the way he has thrown himself into this and the effort he has gone to in order to get his family here for it. He arrived in Townsville on Monday [November 16] so we have been doing some training since then, including getting him in the ocean as he’s never swam in it before!

It’s a very special visit for us. Colombia is so far away and my partner Nancy misses her family [Nancy’s sister Adriana is Manu’s wife]. To be able to spend Christmas with the family is very special and improved only by the opportunity to kick his ass in a triathlon! Jeremy and Manu always manage to have a lot of fun on their catch-ups.

“Colombia is located on the Andes so my ride training has been at an altitude between 2000m to 3000m above sea level. I know most of the riders, especially Jeremy, aren’t used to riding in the hills, so I think it could be a bit of an advantage for me” — Manu

How are you feeling ahead of your first tri? I feel physically ready for it. I am very excited, but also nervous about this race. The only thing I can think about now is hugging my wife and my 18-month-old daughter when I get to the finish line.

How do you feel about your first tri being on Hamilton Island? I am so looking forward to do my first triathlon in Australia — even better on Hamilton Island — I understand it’s one of the most beautiful places in the country. The most exciting part is competing with so many people in a country like Australia. A hilly ride in the mountains of Colombia.

What’s your strongest leg? Definitely riding — I am a mountain bike rider. Colombia is located on the Andes so my ride training has been at an altitude between 2000m to 3000m above sea level. I know most of the riders, especially Jeremy, aren’t used to riding in the hills, so I think it could be a bit of an advantage for me.

What training have you been dong in the lead-up? I have researched the race and found a video made of the bike course by [professional triathlete] Josh Amberger — it was very cool and gave me an idea what to expect. I have been focusing on my swimming — I am not a swimmer, so I’ve had a personal trainer for the past seven months. I have improved a lot, but I don’t feel confident with it. I’m not too worried about my running — I’ve done a couple fun runs in Colombia. The last one was the ‘Bimbo Global Energy Race’, which was 10km and I did that in in 49:19, which I was very happy with.

Are you looking forward to competing with Jeremy? Has he given you any tips? Jeremy came to Colombia last year to meet us and we did some riding together on the mountains. He is a good athlete and convinced me to participate in this triathlon event, and — of course — there is a bit of competition between us! Jeremy has given me some tips, especially about transition and management of time and energy.

Is there anything you are apprehensive about? Definitely swimming — it will be my first experience swimming 750m in the ocean. Could there be some jellyfish? What about crocs?

Anything else to add? I would like to invite anyone who is participating in this event to visit Colombia — there are many things to do, many beautiful places to visit and many delicious things to eat. “The only risk there is wanting to stay”.

Hamilton Island Triathlon and the Whitehaven Beach Ocean Swim are on around the same time every year — mid to late November.  Theses events are designed around an action-packed weekend of events, dinners and skills clinics with Hamilton Island ambassadors like three-time Ironman World Champion Craig Alexander and swimming great Susie O’Neill. For more information about this fantastic weekend of health, fitness and fun, see here: http://www.hamiltonisland.com.au/.

These events form part of Hamilton Island’s Endurance Series, with the Hamilton Hilly Half Marathon becoming a full marathon in 2016. It will be held on May 1 and include a marathon, half marathon and three 7km relays, plus kids’ races. Also look out for the Great Whitehaven Beach Run on June 26, 2016 with 5km, 10km and 21km events, plus kids’ races. Good excuses for a weekend away!