A four-hour flight from Cairns and a two-hour car journey brings us to this idyllic seaside town Busselton, WA, where one of the most scenic IRONMAN races in the world is staged.

“And they weren’t wrong — at the start of the swim it was 20 knots, the water temp was 20 degrees, but the air temperature was only 13.”

Last week, five Townsvillians triathletes travelled to take part in the hardest one-day race that a triathlete can tackle. But the journey didn’t start here — just getting to the start line is a monumental effort of endurance, courage, dedication and support. For Alison Bethune and Jeremy Fitzgerald, it was a day they would never forget, for this was the first time they had competed at this distance — an epic 3.8km swim, 180km bike ride, 42.2km run.

Of the 365 first-timers that toed the line, not all would finish. They were accompanied by previous Ironman finishers Billy Guy, Dee Flynn-Pittar and Mick Jones. Billy and Dee are some of the best the endurance athletes I’ve had the pleasure of knowing, and this was a befitting end to a massive year. Twenty to 30 knot winds were forecast for race morning. And they weren’t wrong — at the start of the swim it was 20 knots, the water temp was 20 degrees, but the air temperature was only 13. This meant an ‘optional’ wetsuit swim under the rules (I really think this should be revised), however there were two individuals who chose not to wear one! The 3.8km swim is tough and unique as it follows the path of the longest timber jetty in the southern hemisphere. When it’s flat it’s hard enough, but even harder then when it’s not. Race day was rough, windy, dark and overcast. There was a plethora of swimmers who were pulled out of the race by the surf lifesavers — in fact, in all my time around the IM and 70.3 circuit, I’ve never seen so many people wearing space blankets, or in the medical tent, having been pulled out of the water. Physical and mental preparation is everything — their day was already over.

All five of our athletes came out of the water in good condition. There was a lot of emotion from Dee as she’s not such a strong swimmer, but she is build of sturdy Irish decent and won’t give in. As she came out we could see she was blue with cold and worried that she could be susceptible to hypothermia as she has only has a small per cent body fat, but she smiled as she does and tootled on past.

“The IM race is called IRON for a reason, and it’s not all about physical ability”

Out onto the bike course and into the wind. It’s a flat course with a few turns, which meant that at least on some of the course there would be a tail wind — maybe. Being flat isn’t all it’s cracked up to be as you generally only use a few gears and the same muscle groups, which often results in stiffness coming off the 180km bike and onto the start of the marathon run. A good tip is to set your alarm to sit-up and stretch every 15 mins or so, and take on some fuel at the same time. Sounds simple, but so many people forget to do just that and then suffer for it later on the run. Speaking of suffering, it’s a good time to note the demons that come out to haunt athletes every step of the way as the race progresses. The IM race is called IRON for a reason, and it’s not all about physical ability. I have seen some exceptionally strong athletes let the mind get the better of them when it starts to hurt, and hurt it will for everyone at some point. Back to the race — Mick Jones was off the bike first followed closely by Billy Guy, the great ‘Clydesdale’. Mick and Billy made it look easy… little did we know Billy popped his calf at the 16km point and every step was “like treading on a lightning bolt”.

Alison Bethune was next off the bike, having endured stomach cramps since the 90km mark. The run was going to be long and uncomfortable, but she still manages a smile. The weather was still playing its part as villain in the day — it was now 4pm in the afternoon, they had been going 10 hours, and it was a very cold and windy. At this stage of the race your body can be in total deficit lacking both calories, sodium and hydration. Nutrition is the fifth element in theses races and can’t be overstated — get it wrong and it can ruin your whole day. Dee, and then Jeremy were now on the run. Dee had entered her element, coming off the bike in 10th place in her age group, she was happy to leave that leg behind. For Jeremy, it was always going to be hard going in to the unknown and pushing his body and mind to the limits — it was time for the game face.

“A Japanese lady collapses in front of us. We rush to help. She, like so many others, had massive leg cramps, so we massage her calves and send her on her way. We see her two hours later finishing”

Kilometre after kilometre the end comes closer and closer. There are many walls — not just one, like they describe in a marathon, because this is no ordinary race. It was the IRONMAN. It’s always humbling as this race produces so much courage in people — egos are left behind months ago in training as you realise how hard it is.

The run becomes a jog, and then becomes a shuffle — just keep going, you can do it! On the run you pass the finish not once, but three times in this looped marathon. A Japanese lady collapses in front of us. We rush to help. She, like so many others, had massive leg cramps, so we massage her calves and send her on her way. We see her two hours later finishing. Another two finishers around us collapse, and just pass out in to unconsciousness. They were not so lucky and the paramedics are called — the body had just had enough.

You collect an IRONMAN band to prove you have been past three times, but finally it’s your turn to have finally earned the right to enter the finishing chute. On the fourth loop you enter the last few hundred meters, which can be one of the most emotional times of your life. For the IM virgins and those who have passed over the finish line before, you will never forget it.  Alison, Jeremy, Mick, Billy and Dee — you are all an IRONMAN! 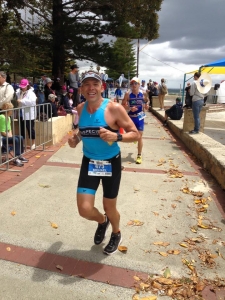 Is doing an IRONMAN on your bucket list? Registrations are now open for the IRONMAN Asia-Pacific Championship Cairns and 70.3 in Cairns on Sunday, June 12, 2016. Find out how to start training with the Free Radicals Tri Club here.