A familiar face around Townsville’s active scene, Emma Blacklock’s willingness to get out there and give anything a go has been an inspiration to many — not that she’d ever admit that. At 100kg, Emma tackled challenging Adventurethon events at Magnetic Island and Pallarenda, the Paluma Push mountain bike race and the Townsville Running Festival’s Half Marathon.

Now 35kg down after gastric sleeve surgery in August last year, there’s no stopping the bubbly mother-of-four. We caught up with Emma to find out how she’s staying active, her next goals and how her weight loss hasn’t been the easy road that many assume surgery is.

Occupation: Primarily mummy to four, but we also own our own grounds maintenance business, Ausfield Services, which I manage.

What are you doing to get moving at the moment? Everything (time permitting)! Mountain biking, running, kayaking, some swimming, road riding and weekly PT with Sam Stedman. 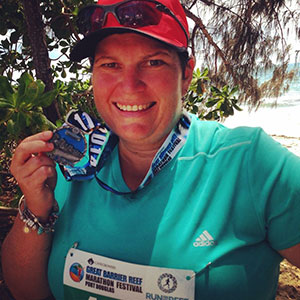 Emma after the Port Douglas Half Marathon.

What activity makes you the happiest and why? Running. It’s my time out and ­— with four kids — I need time out.

How did you discover it? When I was doing Bushland Beach Bootcamp, a group of us decided to do the Mother’s Day Fun Run — from there, I was hooked.

Have you always been active? When I was younger, yes, but then I had children and it stopped for a number of years. That’s when my weight crept on and — combined with having hypoglycemia [abnormally low blood sugar] — I was on my way to developing diabetes. I started moving again and doing events when the kids (Sullivan, 14, Imogen, 12, Darcy, 11, and Archie, 10) got a bit older, but was described as a “plodder”.

Are you a morning or afternoon mover? I’m a time manager mover — sometimes morning, sometimes post school drop off, sometimes while dinner is cooking — whatever fits in with our busy day and the kids’ schedule. What’s your favourite thing to do on a weekend in Townsville? A mountain bike ride with the family. Our favourite place as a family is Under the Radar at Pallarenda.

“When I see myself in the mirror I think, “That isn’t me!” — it hasn’t clicked how much weight I’ve lost”

Your most motivating tune? ‘Dog Days are Over’ by Florence + the Machine. I love Running Trax by Ministry of Sound and I’m a complete and utter Paul Kelly devotee. Motivational quote? The poem, ‘If‘ by Rudyard Kipling. It’s something to live by.

How do you pep yourself up when you’re craving the couch? Sometimes a nanny nap solves all our problems!

Do you prefer to get active solo, or with a buddy? Prefer solo, especially when it comes to running.

Most annoying fitness fad? Thigh master (remember those? A 90’s fad!). And, yes, I had one.

What’s your greatest fitness achievement? Anytime I finish a race — they are all great achievements. To-date, I’ve done two Adventurethon Enduros (and attempted to finish two duathlons), plus two half marathons, and three Paluma Pushes, including the new intermediate category last year.

“To us, he was a champion because he got out there had a go and completed what he set out to do”

Most memorable active moment? I love watching my kids compete and I’m the proudest mummy ever at a finish line. I especially love their faces when they finish Adventurethon. The sense of achievement they feel is amazing. I’ll never forget Archie’s first Adventurethon on the Island. He’d had a terrible race (flat tyre, no paddling skills) and finished last. Everyone at the Picnic Bay Hotel cheered him across the finish line. He thought he was a champion, grinning from ear-to-ear, and showing off his medal. And, to us, he was a champion because he got out there had a go and completed what he set out to do. What activity have you always wanted to try (and what’s holding you back)? Until recently it was road biking. I’ve signed up to Townsville to Cairns Bike Ride [July 2016] with the Outer Limits crew and I’m really excited. I guess I can cross that one off? Emma running before her weight loss.

What’s your arch nemesis (e.g. time, injury, self-doubt) and what have you done to conquer it? My weight, but that’s being kicked to the ground. I’d unsuccessfully tried to lose weight for years before making the decision to have gastric sleeve surgery last year. It wasn’t a decision I took lightly and I did plenty of research — just the fact that you spend the first few hours in ICU post-surgery speaks of the risks.

There’s a lot of preparation beforehand — seeing a psychologist, dietitian, meeting with the surgeon (Dr Sam Baker) and other specialists. The recovery was the hardest bit — you spend the first three days living off ice, then 21 days of fluids, then after that you gradually introduce solids.

My case was a bit different in the sense that I love to exercise, so it was more the challenge of getting used to being active on 500-800 calories a day, so it was important I took the right vitamins and supplements too. Since then the weight has fallen off me. My goal was to get to 70kg, which I recently reached, but I have no idea how much I’ll lose. When I see myself in the mirror I think, “That isn’t me!” — it hasn’t clicked how much weight I’ve lost. 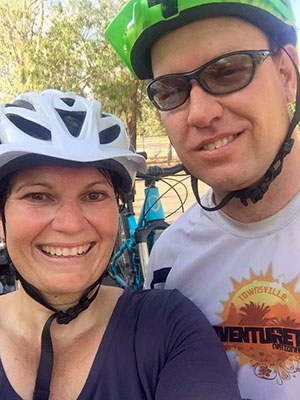 In saying that, it certainly hasn’t been an easy journey and I’d advise anyone thinking about surgery to do their research first as this option isn’t for everyone (it took me months to overcome the fatigue and there are things that I can no longer eat as they make me feel sick). But the positives have been far greater than the negatives — I can now run up Castle Hill! My next big goal is to run a marathon and I couldn’t do this at the weight I was. Hopefully I can tick this challenge off at the end of the year and my success will encourage others to explore gastric sleeve as an option.

What’s something we don’t know about you? I have a penchant for Country Music — Dixie Chicks, Miranda Lambert, Carrie Underwood, Casey Chambers, Shane Nicholson, Busby Marou, and Jewel.

What’s your next goal? I have three main goals for 2016 – smash my Paluma Push finish time, do the Townsville to Cairns Bike Ride in July and — of course — complete my first marathon later in the year.

Most embarrassing moment on the go? There was a certain chopper ride from Douglas Mountain Bike Park… thankfully nothing was broken!

Who would you most like to train with (e.g. famous person, or someone you look up to)? Three-time World 24-Hour Solo Mountain Biking Champion Jess Douglas – I’d love to ride with her and get some mountain biking tips.

The training advice I wish I’d listened to was… I just wish I’d moved more after I’d had each baby. My best local fitness tip is… Castle Hill isn’t the only hill.

Last words? If someone tells you that they don’t think you can do something, kick them in the shins and ask, “Bet you didn’t think I would do that?”, and walk away, head held high.