Swimming has taken centre stage for most of Dylan Viviers’ life. After a car accident as a teen that killed his hopes for a competitive career in the pool, Dylan returned to the sport as an adult to coach swimmers at state, national and international levels. After another hiatus – this time over seven years to focus on work and family – he’s now taken the plunge back in to fill a niche: training long distance and open water swimmers. As a teen, you could say Dylan Viviers was active: Competing at a state level for swimming, he also did surf lifesaving, and triathlons where he competed against the likes of four-time world number one triathlete Brad Bevan. But life has a habit of throwing curveballs: At 15 Dylan was in a serious car accident that nearly killed him and abruptly snuffed any sporting aspirations he had.

So it was only fitting that in his adult years Dylan should choose swimming coaching as his profession; and he went on to work with some of the country’s best up-and-coming talent. Dylan’s skills were also on demand with elite sporting clubs and he ran swimming rehab sessions for the likes of the North Queensland Cowboys. But seven years ago Dylan paddled away from the pool – he needed a change and it was getting increasingly testing trying to incorporate his other project management work and family commitments. That was until he was asked to do some relief work at Long Tan Pool last year. Dylan admits that he wasn’t expecting the floodgates to open so quickly:

“It brought the love of coaching back,” he reveals over a coffee before starting his day job. Once the relief work finished a couple of the swimmers asked if he would consider coaching them part time. These athletes all had something in common – they were training for triathlon, long distance open water swimming, or Ironman events and were struggling to reach the level of endurance required. “Northern Beaches Leisure Centre was kind enough to allocate me a couple of lanes four or five times a week,” tells Dylan. “We decided to give our little squad a name and that’s how Peak Performance Swimming (PPS) came about. My challenge then was to find these guys other swimmers or triathletes of the same or similar ability to train with.”

“Make your training a priority and make sure you fit it in because we all go through life working, working, working; but unless you set yourself goals and commit to them you’ll have regrets” 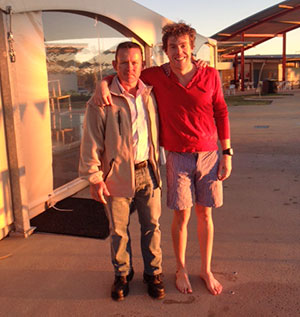 And that he did; with PPS now home to about 40 swimmers – all adults and self-motivated. “We’ve got Sam Murphy and Troy Argent who both went to 2014 World Championship Ironman and 70.3 events respectively; Ahlanna Hayes who’s training to do the staged two-day 20km Epic Swim in NZ in January and Karl Blechen who did well in the State Open Water Swimming Titles and is now training for the National Open Water Championships,” explains Dylan, who gets up at 3am every morning to fit his own training in, plus fulltime work, coach the squad and be able to take 13-year-old son Ethan to his sporting commitments.

But despite the high calibre of above-mentioned squad members, Dylan’s sessions are open to various capabilities as the lanes are divided up according to ability and time base. The current base level is being able to swim 3km-4km a session, while PPS looks to open some Learn to Swim classes for adults early next year to target beginners. Ultimately, it’s all about pushing your boundaries and developing yourself as a person, says Dylan, regardless of your level:

“Ninety-per-cent of people who swim in the squad for the first time admit they have never swum that far in a session. The problem is people underestimate themselves: When they are training solo they tend to take the easy option and think, ‘2km – I’ve done enough’. But in a squad you have a coach training you and the motivation of your peers which helps you to push harder.” Since coming back to coaching, Dylan has also been pushing himself harder with the help of his own coach, Simon James from Off N On Bikes. This has allowed him to get back into triathlons this year – something he’s been able to do alongside his son. “Getting Ethan involved in triathlons has motivated me – I’ve lost 12kg since March and I’m loving it,” Dylan says. “Ethan is at the age now where we train together and push each other. It’s definitely tricky juggling his sport with mine, but we just work around it; for example I’ll take him to the velodrome and go for a run while he’s on the track.”

Father and son went to the inaugural Yungaburra ‘Soldier On’ Triathlon in late November and both came third in their respective age groups. Dylan is now setting his sights on the Cairns 70.3 Ironman in June, something he has wanted to do for some time now.

Dylan’s partner Lorraine also likes to keep active and – fittingly enough – comes from an aquatic background, with her father, Jim Harvey, founding the Aitkenvale Swimming Club. Although, nowadays, Lorraine prefers to keep her toes dry, with her activities focused on walking, running and being cheerleader/support crew at whatever events the boys are at.

“Peak Performance Swimming is about the family and surrounding everyone in a positive environment, so it’s perfect for us – it’s just a matter of fitting everything in – you could say it was a constant juggling act,” says Dylan with a laugh.

Certainly qualifying for the question: What tip does Dylan have for people trying to squeeze-in training amongst a busy schedule? “You have to make time because if it’s important to you you’ll do it,” says Dylan. “Make your training a priority and make sure you fit it in because we all go through life working, working, working; but unless you set yourself goals and commit to them you’ll have regrets.” 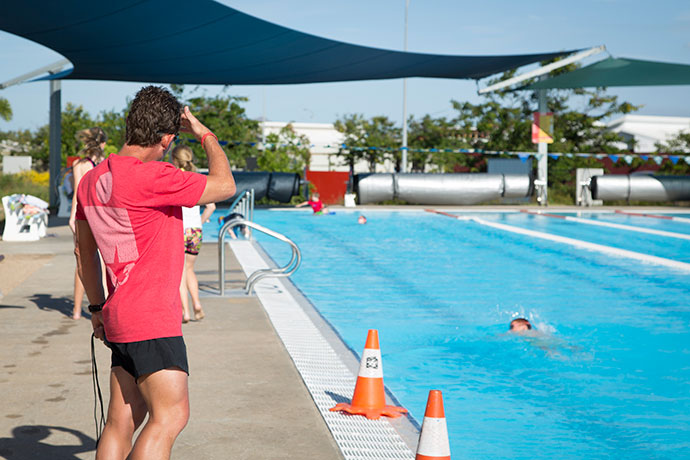 Peak Performance Swimming will be expanding its offering in January to provide adult beginner classes, and is also looking to facilitate brick sessions on Saturday mornings which incorporate swimming, cycling and running.