Rediscovering her childhood passion for swimming just five years ago, Ahlanna Hayes has since been named Townsville Sportsperson of the Year, won a National Masters event, and has completed a Half Ironman. For this modest mother of five, there’s nothing better than pulling on her togs (she has a few to choose from!) and plunging into the enveloping water.

“[I love]the feeling of freedom in the water, the quiet time it gives me away from everything and the sense of achievement after doing a tough session”

How long have you been swimming and how did you discover it? I started when I was two and began competing at state level when I was nine, but gave it away in my early teens. I got back in to it five years ago, but only seriously when I met my coach [Dylan Viviers] early last year.

What do you love about it? The feeling of freedom in the water, the quiet time it gives me away from everything and the sense of achievement after doing a tough session. What’s your greatest achievement? Being Townsville Sportsperson of the Year in 2013 was very special, but my greatest achievement would have to be winning the 800m freestyle at the Masters Nationals this year. It was the perfect race from start to finish.

What’s your next goal? The Epic Swim this January in New Zealand. It’s a total of 20km over two days broken into four separate races – a 5km, 10km and two 2.5km.

What are you doing to get there? Swim training six days a week (with my squad Peak Performance Swimming) at least 5km each session and 10km or more on a Saturday.

How else do you stay active? Not much else! I cycle a little bit, walk the dog and do basic body weight training if I feel like it.

Are you a morning or afternoon mover? Definitely morning. The afternoons can be a real struggle. What’s your favourite thing to do on a weekend in Townsville? A long swim on a Saturday morning at North Shore, followed by good coffee (MJ&Co, Juliette’s or Fratello) and relaxing with the kids [aged 7, 8, 11, 14 and 15] at Riverway or taking them for a ride around the river.

Your most motivating tune? The Phoenix by Fall Out Boy and Not Giving In by Rudimental.

Motivational quote? “You don’t have to feel good to swim fast” – Dara Torres

“I’ve had two ‘wardrobe malfunctions’ with my racing swimwear at events. One time they split…”

How do you pep yourself up when you’re craving the couch? Knowing how cranky I’ll be if I skip training.

Do you prefer to get active solo, or with a buddy? With a buddy: It’s more enjoyable to train hard when you are trying to beat the person next to you. Most annoying fitness fad? The ab machines for sale on TV and fad diets. I believe everything in moderation when it comes to nutrition.

What activity have you always wanted to try (and what’s holding you back)? Shark cage diving, which I haven’t done due to time and cost, and bungee jumping; but I’m so scared of heights! 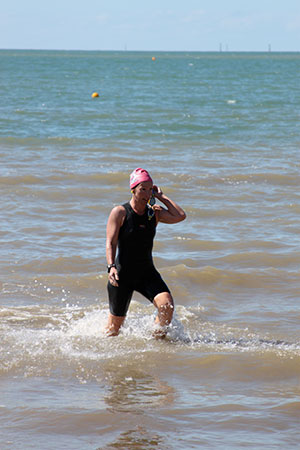 What’s something we don’t know about you? No one can pronounce my name properly, which doesn’t bother me because all my life people have been saying it incorrectly and I’ve gotten used to it so much so that when people do say it correctly it sounds weird. For the record, it rhymes with goanna :)

Most embarrassing moment on the go? I’ve had two ‘wardrobe malfunctions’ with my racing swimwear at events. One time they split, and another time the water was so rough they weren’t holding much in!

Who would you most like to train with? Mirinda Carfrae, triple Ironman World Champion.

The training advice I wish I’d listened to was… Something I still need to listen to and that’s to believe in myself more.

Most treasured piece of fitness gear? DMC swim fins: anyone who trains with me knows my obsession with them and my collection of togs.

Tell us a joke (why not?) I don’t know any appropriate jokes for here!

Last words? Relax. Nothing is under control.